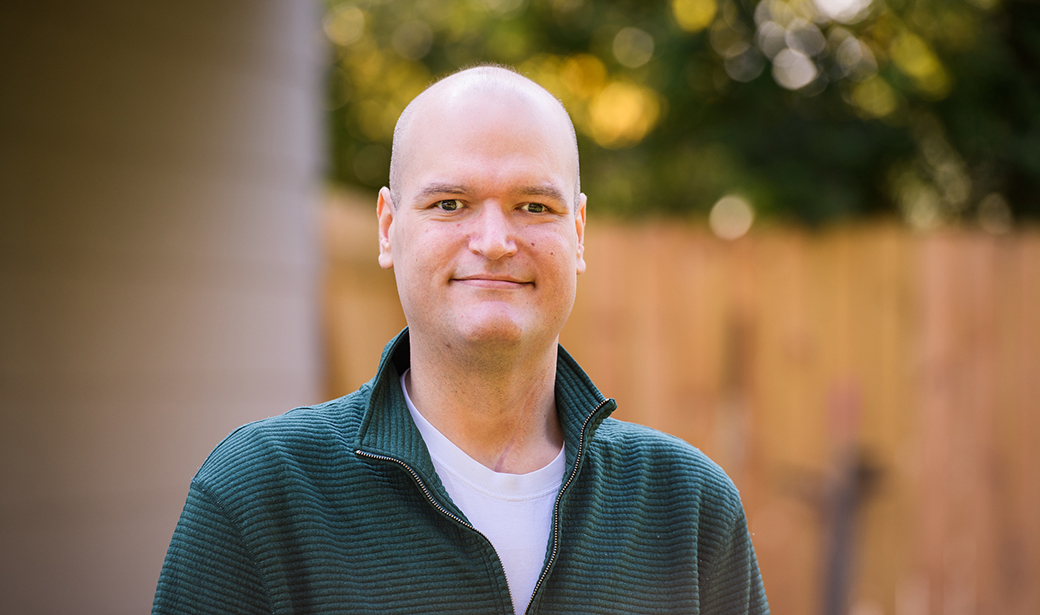 More than a decade after his playing days as an offensive lineman at Fitchburg State University in Massachusetts, Jim Foltz was still a big guy at 6-foot-3 and 300 pounds. He easily could polish off a double cheeseburger and fries during his breaks at work as an anesthesia technician at MU Health Care.

But in the summer of 2019, Foltz started losing his appetite. The smallest portions of food left him uncomfortably full.

“I thought maybe my metabolism was changing,” Foltz said. “It didn’t seem like a bad thing at first — losing weight — but it got out of hand.”

He lost about 100 pounds in eight months. Then he started feeling back pain. Foltz made an appointment with his primary care doctor, thinking he might have kidney stones. He ultimately learned it was something far more serious than that.

Unusual feelings of fullness and unexplained weight loss are warning signs of esophageal or stomach cancer. In Foltz’s case, a tumor that began at the junction of the esophagus and stomach had spread up through the esophagus and down through the stomach, into his pancreas and even into the celiac artery that feeds the organs of the upper abdomen.

It was a startling and grim diagnosis.

Fortunately for Foltz, some of the surgeons he regularly worked alongside were pioneers of a procedure in which the esophagus and stomach are removed and replaced with sections of the colon and small intestine, respectively. They also had experience performing what is known as the Appleby procedure, in which a portion of the pancreas and celiac artery are removed and the blood supply to the liver is rerouted.

But neither they nor anyone else had ever combined all of that removal and reconstruction into one marathon surgery.

“With a tumor that extensive, you might think it’s incurable and unremovable with surgery,” said Kevin Staveley-O’Carroll, MD, PhD, surgical oncologist at MU Health Care’s Ellis Fischel Cancer Center. “But Mr. Foltz is a young, sturdy person, and it looked like the tumor was confined to this locality. If we could manage to get it out, he might have a chance.”

In 2007, while working at Penn State, Staveley-O’Carroll and his colleagues treated a man with a tumor that had invaded his esophagus and stomach. They replaced his esophagus with a section of his colon, removed his stomach and attached the “colonophagus” directly to his small intestine. Staveley-O’Carroll and his team — including Eric Kimchi, MD, and Diego Avella Patino, MD, who both later followed him to MU — published the first paper describing a surgery in which the entire esophagus and stomach were removed.

The patient, Barry Whitcraft, is alive and well today with no recurrence of cancer.

“When he drew his little diagram showing how the procedure would work, I thought, ‘There’s just no way,’ ” said Whitcraft, 74. “Thankfully, there was a way.”

MU Health Care has become a destination for patients with gastrointestinal cancers who need their esophagus, stomach or both removed. But Foltz’s case was different because the cancer also had invaded his pancreas and celiac artery.

“This is the biggest surgery I’ve ever heard of,” Staveley-O’Carroll said.

On June 15, 2020, Foltz was wheeled into the operating room for a very long day. He was so calm and convinced that he was in good hands that he casually discussed sports with the nurse anesthetist before the procedure.

Lead surgeons Staveley-O’Carroll and Jussuf Kaifi, MD, PhD, who have worked together since 2009, said they didn’t do anything out of the ordinary to prepare themselves for the length of the surgery. They usually have a playful conflict over the music in the operating room — Staveley-O’Carroll prefers country, while Kaifi’s favorite band is Coldplay — but during a 20-hour procedure, there was plenty of time to hear the entire musical spectrum.

They were assisted for parts of the surgery by Sebastian Wiesemann, MD, who removed cancerous lymph nodes from Foltz’s chest, and Zihao Wu, MD, who repaired Foltz’s colon. Staveley-O’Carroll and Kaifi remained in the OR the entire time except for a short break during the colon reconstruction when they relaxed in the doctor’s lounge.

In the wee hours of June 16, Foltz’s girlfriend received a text saying surgery was over and it seemed to go well. Time would tell how Foltz’s body would react.

After surgery, Foltz spent a day in the intensive care unit and two weeks in the oncology unit. He initially received nourishment through an IV, then moved to a liquid diet and within a month was eating several small meals per day with solid foods.

He has to be careful about eating too much and can no longer eat the spicy foods he loves. He will have to get a monthly B12 shot for the rest of his life, because without a stomach he can no longer absorb that vitamin, but other than that his body gets the nutrients it needs from his diet.

In addition to surgery, Foltz has received chemotherapy and radiation.

“My approach has been: What’s next? What can I do to help this situation?” Foltz said. “If I can be early to an appointment, I am. I’m just ready to take it head-on. It’s almost like a football player’s mentality. They used to tell us that all you can control is your effort and attitude. I adopted that with this diagnosis.”

Foltz’s success story could redefine what is possible for patients with advanced gastrointestinal cancers.

“A procedure like this really adds to our spectrum here,” Kaifi said. “We can do something like this here with our team. We can offer this for future patients and do it safely.”