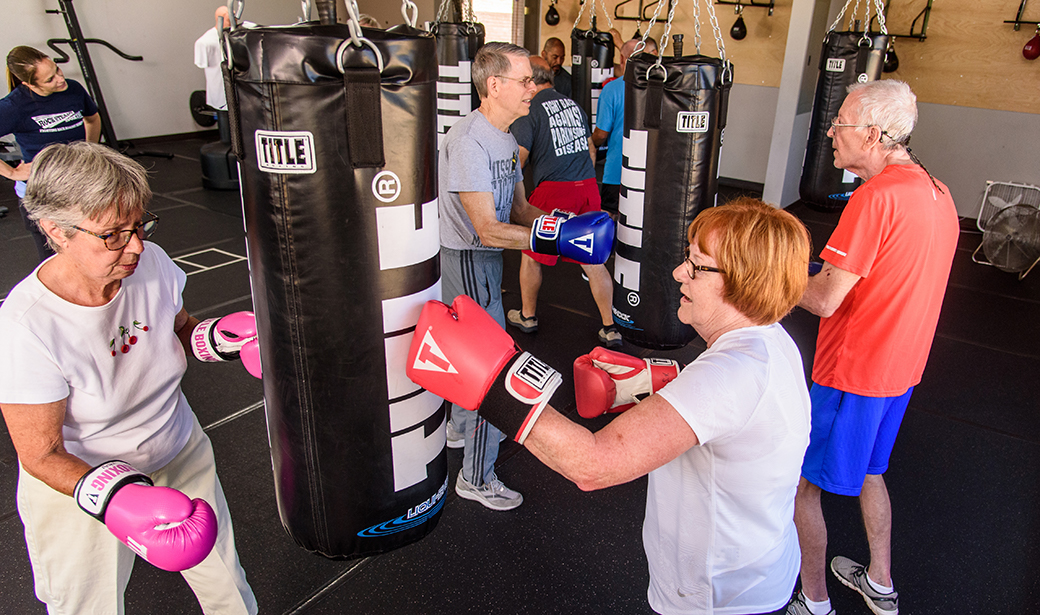 Three times a week, Susan Vittone, a 5-foot-4 former kindergarten teacher, makes the 45-mile trek from her home in Mexico, Mo., to Columbia for a workout class. Unlike most women her age, Susan’s workout includes lacing up a pair of gloves and whacking a heavy bag suspended from the ceiling in MU Health Care’s Human Performance Institute (HPI).

“I never thought I would ever be boxing,” she said with a laugh. “I am not sure if my mother would approve.”

But Vittone knows her mother would be in her corner knowing the critical link between boxing and her good health.

Vittone was diagnosed with Parkinson’s disease in December 2015.  She described her initial reaction as “devastation.” A friend suggested that she watch a video about a specialized workout called Rock Steady Boxing. Her neurologist said she should give it a try.

The benefits have been invaluable for Vittone, who credits the program for keeping her symptoms at bay.

The class begins like any other workout for a mature group, with warmups that focus on balance and agility. Then, it’s time to box. The participants don’t hit each other. They pound heavy bags and the smaller speed bags.

The trainer yells numbers that correlate to punches — a jab, hook or uppercut, thrown with the right or left hand. Then, with loud voices, the group repeats the numbers. It’s an effort to keep the brain active while making large movements. The yelling is therapy, too.

“Parkinson’s is a shrinking disease,” said Becky Edwards, therapy manager at Mizzou Therapy Services and a certified Rock Steady Boxing coach. “Not only do your movements shrink, but the voice tends to shrink as well.”

The Parkinson’s Disease Foundation estimates there are more than 1 million people in the United States with Parkinson’s disease. More than 60,000 people are diagnosed each year.

It is one of many movement disorders characterized by excessive or involuntary movements or reduced movements. These disorders require complex care from an experienced team of specialists. While the diagnosis and treatment may be complex, Junaid Siddiqui, MD, a board-certified neurologist at MU Health Care, said they can be described with the simple acronym TRAP. The T stands for tremor at rest; R is for rigidity or stiffness; A is for akinesia or slowness; and P is for postural instability or walking difficulties.

“You need three of the four symptoms to be diagnosed with Parkinsonism,” Siddiqui said. “Once you have that diagnosis, the most common cause is Parkinson’s disease, but there are other conditions that can mimic Parkinson’s.”

Many participants in the Rock Steady Boxing class struggle with spatial awareness, which is the ability to navigate in a given space. Siddiqui says it is common for patient to stop and need a prompt to take the next step. Greg Busacker of Hartsburg is frustrated by the need to “think” to walk.

“I like to move without thinking about it,” Busacker said. “You spend a lifetime doing that.”

There is no cure for Parkinson’s, but Rock Steady Boxing is designed to slow the disease progression. The program started in 2006 after Scott C. Newman of Indiana was diagnosed at age 40 with early onset Parkinson’s. According to the group’s website, Newman improved his physical health, agility and daily functioning through the intense workouts.

The people that gather each day at the Human Performance Institute gym are already believers.

HPI was the first location in Missouri to offer the class. Capital Region Medical Center’s Sam B. Cook Healthplex is starting a class in September in Jefferson City. It will be the ninth location in the state where the class is offered.

For Steve Mickelson, who attends Rock Steady Boxing three days a week, the class is not just about the workout but the camaraderie.

“It’s not a competition amongst people. Everybody is doing what they can,” Mickelson said. “We have all different levels and all different progressions of this disease, and you can see here the different people of all different ages. So it challenges everybody.”

Busacker said the workouts improve his body and mind.

“Coming here keeps my attitude positive,” he said. “I don’t have time to feel sorry for myself.”

In addition to being a neurologist, Siddiqui is a psychiatrist, and he knows the benefit of any support group.

“You find support, and encouragement as you look at other people who are doing better or worse,” he said. “You definitely find benefit from that.”

Vittone still drives and maintains an active lifestyle, and she has gained confidence from the workouts. She’s been at it for more than two years and can safely say despite the challenges of living with Parkinson’s, she is stronger now than she was before the life-changing diagnosis. 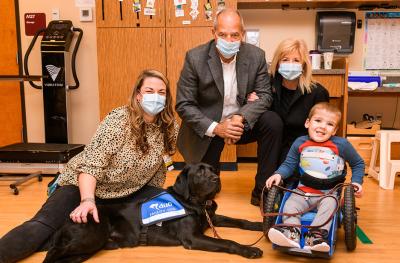