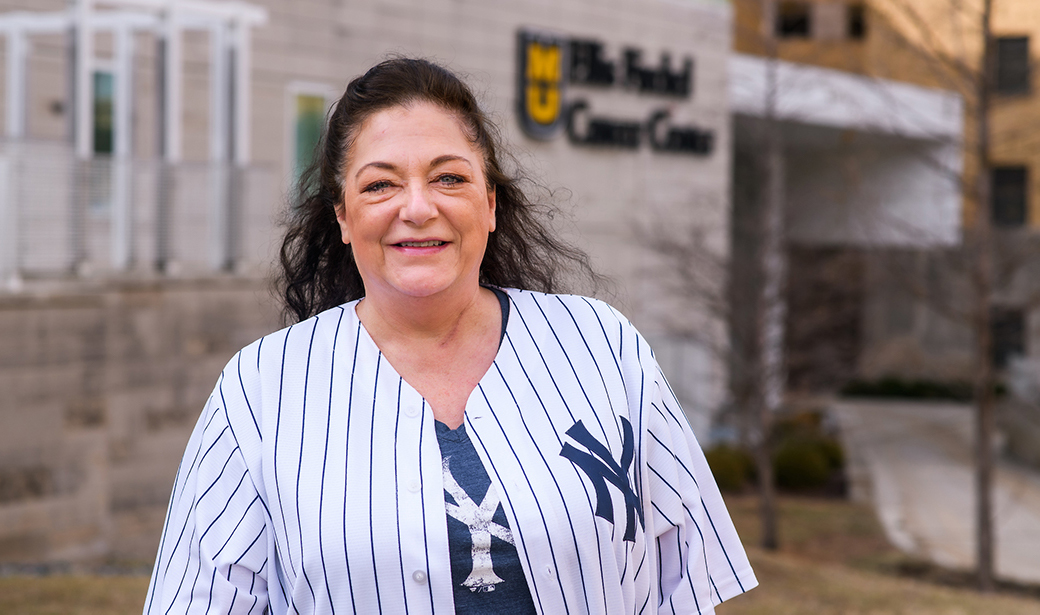 The recommended age for a first colonoscopy varies depending on the person. See where you fit in, and ask your primary care doctor for a referral to get a colonoscopy at the right time.

Sue Nelson’s love of sports and her New Jersey roots are evident when she ticks off the list of her past and present pets. Her cats and dogs were named after former New York Giants football players and New York Yankees baseball players.

And since moving to Missouri 12 years ago, Nelson has done her best to blend with the sports fans in her new state. The name of her most recent fantasy football team was “Country Roads, Take Mahomes,” in honor of Kansas City Chiefs quarterback Patrick Mahomes.

“I know it’s all a little excessive,” she said with a laugh about her sports fandom. “We have an entire room in our home dedicated to our favorite teams and an 85-inch TV to watch the games.”

Nelson, a human resources director for a cybersecurity company who lives in Blue Springs, doesn’t do anything halfway. That includes advocating for her own health and spreading the word about a simple screening that could save lives. She speaks from experience.

“When I turned 50,” she said, “I went to my primary care physician and said, ‘Shouldn’t I get a colonoscopy?’”

Colorectal cancer will strike 4 to 5% of Americans in their lifetimes, and many of those people show no symptoms in the early stages of the disease when it is most treatable. Nelson had no reason to think she had a problem before her first colonoscopy in June 2017 at MU Health Care’s Ellis Fischel Cancer Center. But the colonoscopy found a polyp, which is a clump of cells that forms on the lining of the colon and can develop into cancer.

She underwent an endoscopic mucosal resection — or EMR — a procedure in which a flexible scope clips off the polyp. The removed polyp was examined by a pathologist to determine if further steps were needed.

“Based on the features of the polyp, we were concerned it could have a few cancer cells left behind that would spread to Sue’s lymph nodes next to the colon,” said MU Health Care colorectal surgeon Zihao Wu, MD. “The best choice was to remove that section of the colon along with the lymph nodes near the colon.”

Because people have about five feet of colon, portions of it can be removed with no effect on bowel function. Wu performed a robot-assisted resection, which uses smaller incisions to gain access to the colon and allows patients to recover quicker than they would after traditional open surgery.

In about half the cases of colon cancer, the disease invades another part of the body — most commonly the liver — although the chances of that happening are reduced if the original cancer is found and treated early. Unfortunately, Nelson’s cancer returned. In November 2019, scans detected three tumors on her liver.

A few decades ago, that diagnosis would have been something close to a death sentence. But a combination of new chemotherapy drugs and improved surgical techniques have dramatically changed the outlook for patients like Nelson. Ellis Fischel’s specialists in liver surgery are now able to remove metastasized colorectal tumors if at least 25% of a healthy liver can be preserved. After surgery, the remaining portion of the liver enlarges to normal size in a few weeks and regains full function within about a month.

“This is one of the most exciting developments in cancer treatment, because so much has changed,” said Eric Kimchi, MD, an MU Health Care surgeon who specializes in gastrointestinal cancers. “When I was training in the early 2000s, these concepts were just coming out. It’s not often that we have these quantum leaps in how we treat patients, but our aggressiveness in treating colon cancer metastasis has been one of those.”

Nelson’s treatment began with chemotherapy. When the tumors responded by shrinking, that was a sign she was a good candidate for surgery, which she had in May 2020. Kimchi removed the largest tumor surgically. Based on the smaller size and location of the other two tumors, he used a technique called ablation to burn them with a probe. That allowed him to avoid removing any more of Nelson’s liver than necessary. She then completed the remaining doses of her chemotherapy.

For the first two years after finishing her treatments — the most likely window for cancer to come back — Nelson is returning to Ellis Fischel for scans every three months. So far, they’ve all been clean. After two years, she will come back every six months for checkups.

Nelson feels good and is optimistic about a cancer-free future. She is still fanatical about her favorite teams and an avid participant in fantasy sports leagues, but her recent health scares have put the games in perspective. Now, her biggest passion is getting the word out about cancer screenings.

“The key, the absolute key, is getting an early colonoscopy,” Nelson said. “And if you are having symptoms, it doesn’t matter if you’re 20 or 60, go to your doctor and insist on a colonoscopy.”