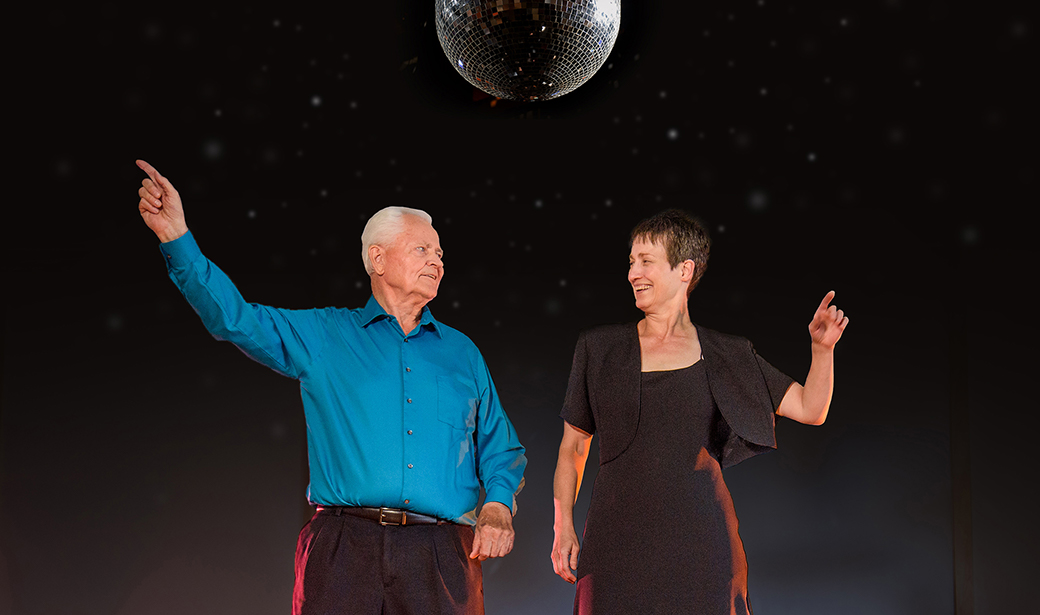 Three years after having both hips replaced, Jon Pierce shows his primary care nurse, Alicia House, LPN, that he still has the moves that helped him win a disco contest in the 1970s. Pierce, who was confined to a wheelchair before his hip replacements, has regained his independence and can dance again.

On a magical Hawaiian night in 1974, Jon Pierce stepped onto a dance floor packed with people in polyester and platform shoes. When the music finally stopped in this disco contest, Pierce and his partner were the last dancers standing. It is a victory he jokingly refers to as “the highlight of my lifetime.”

Disco’s mass appeal faded in the 1980s, but Pierce, 75, never stopped loving the music and the way dancing made him feel.

“Any time disco comes on the radio, I don’t care if I’m cooking dinner, I’ll do a few fancy moves as I’m moving around the kitchen and take the spatula and toss things up in the air,” he said.

Pierce attended his first dance — sponsored by his Boy Scout troop — as a 12-year-old in his home state of Iowa. He was hooked. Despite a bout with polio as a 4-year-old, he was able to swim, golf, wrestle and play football through his teenage years, but dancing has been his favorite lifelong activity.

After college, Pierce taught high school math and science and coached wrestling before switching to a career in medical sales that overlapped the disco era. He and a group of dietitian friends danced the nights away.

“I liked other music, but disco brought life,” he said. “I just felt completely alive, energetic. It was better than a good golf game.”

A female companion convinced him to switch careers and locations in the 1980s, and he settled in the small Missouri Bootheel town of Blodgett and worked as a nursing home administrator. In recent years, his health deteriorated on several fronts, and he relocated to mid-Missouri to be closer to two of his daughters and his specialists at MU Health Care.

The most painful of his problems was arthritis in both hips that left him confined to a wheelchair at The Neighborhoods by Tiger Place, a skilled nursing facility in Columbia. That is where he met his new primary care physician, MU Health Care’s Amitava Dasgupta, MD.

“The first thing you do with a new patient is get a weight and a height if you can,” said Alicia House, LPN, the nurse who works with Dasgupta. “His hips popped so loudly when he tried to stand up, you could hear them all the way back to our work area. He was very frail. He looked so much older than he really was.”

"He had severe bone on bone arthritis in his hip that even started to cause a deformity of the ball of his hip due to insufficiency fractures, or weakness in the bone," said David Freeze, the nurse that assisted during surgery on his right hip. "As expected he had worsening pain and arthritis only continued to progress. As the arthritis continued to worsen, so did his mobility and ultimately spend most of his time in a wheelchair. He was pretty miserable."

The only solution was a double hip replacement. He had surgeries on the left and right hips six months apart in 2016.

In each case, Pierce spent a few nights in the hospital recovering. After each surgery, he needed to use a cane or walker for about six weeks.

Pierce bonded with Dasgupta and House as he recovered. They provided emotional support as he became more independent and got off the pain pills he needed before his surgeries.

The color returned to his face. His gregarious personality re-emerged.

“He has really made an about-face to a degree I’ve rarely seen,” Dasgupta said.

Pierce rehabbed by walking, riding a stationary bike and lifting weights. Still, he wondered if his new hips could swivel like the old ones.

“Disco dancing struck my mind right away,” he said. “I wanted to see if I could dance. So, I started practicing.”

In June 2018, with House as his partner, Pierce returned to the dance floor. Sure enough, when the music started, he was right back in the groove. Pierce hopes to continue dancing as a way to stay young and meet new people.

"Dancing is a great activity to do for hip-replacement patients," Freeze said. "For Mr. Pierce, his passion was dancing and seeing him in follow up visit, that’s all he could talk about.  He found his joy again and was thrilled to be back out there."

Learn More About Our Care
Hip and Knee