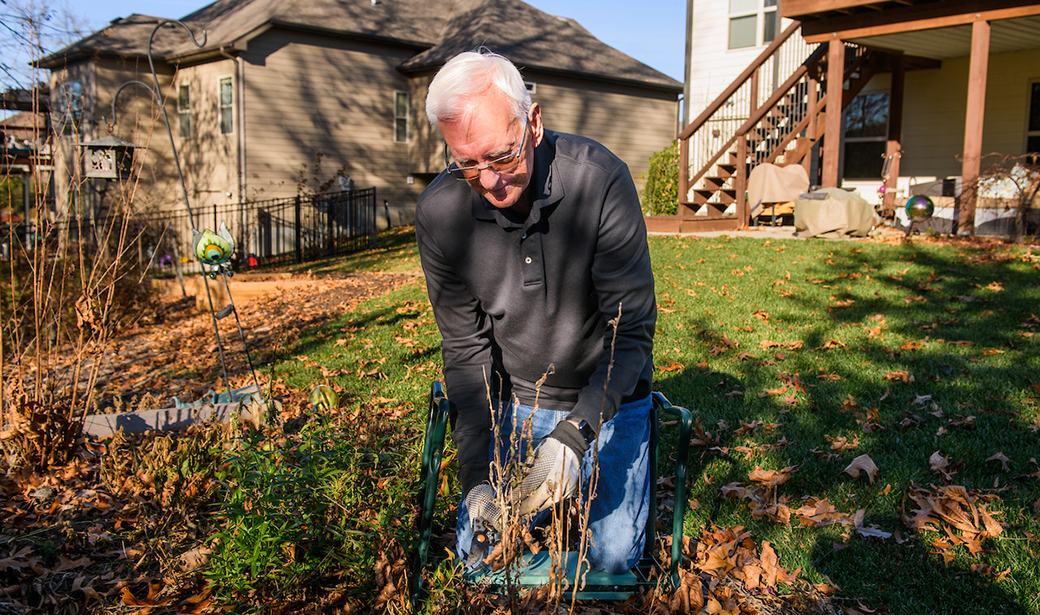 Bill Wiebold developed a love of the land growing up on his family’s farm in Iowa. He had plenty of time to think about the soil underfoot as he walked the fields of corn, soybeans, oats and hay while rooting out weeds with a hoe.

“You’d think that would have turned me off of crops,” he said. “But it didn’t.”

Wiebold wound up making plant science his life’s work. As a professor of agronomy at the University of Missouri’s College of Agriculture, Food and Natural Resources, his research and outreach helped the state’s farmers get the most out of their land. For the past three decades, the Columbia resident’s experiments with no-till farming, crop rotation and cover crops have provided valuable information about methods for reducing soil erosion and improving yields.

“You get to work, enjoy what you’re doing and know that you’re making a difference in people’s lives,” Wiebold said. “That’s a pretty good deal.”

Wiebold is mostly retired, but he still dabbles in agriculture as a part-time employee of MU Extension — where he serves as one of the state’s foremost experts on soybeans — and as the director of MU’s Grape and Wine Institute. His love of plants spills into his hobbies as well. He enjoys gardening, nature photography and visiting Missouri’s wineries with his wife, Wendy.

Those activities were put on hold in 2020 when the pain in his left upper jaw that he thought was a toothache turned out to be a symptom of something far worse. When an oral surgeon took X-rays, he saw what appeared to be a tumor in Wiebold’s left maxillary sinus cavity. Wiebold was referred to Patrick Tassone, MD, an ear, nose and throat specialist at MU Health Care’s Ellis Fischel Cancer Center. A biopsy confirmed the 1½-inch tumor was cancerous.

Tassone explained that treatment would require a surgery team. Tassone would remove the tumor, and colleague Tabitha Galloway, MD, would reconstruct Wiebold’s face using bone and tissue from his lower leg. MU Health Care is the only health system in mid-Missouri that performs the complex procedure, which is known as a free tissue transfer reconstruction.

“One of the important things when facing a cancer that requires a large operation and reconstruction is to go to a place that does a lot of them,” Tassone said. “This is what we do every week. That experience helps us get great outcomes for our patients.”

On Aug. 27, 2020, Tassone began the 12-hour surgery by making an incision from the inner edge of Wiebold’s left eyebrow, down the left side of his nose and through his upper lip. That allowed him to pull back the skin and get access to the part of the upper jaw he needed to remove to get to the tumor.

“The maxillary sinus is essentially a six-sided box,” Tassone said. “To get safely around it on all six sides involves cutting through quite a bit of bone as well as the soft tissues. The bone that has to be removed has three critical functions in our face. One is to provide support for our eyeball. The second is to be a place for the roof of our mouth to sit so our tongue has something to push against when we speak and swallow. The third is the projection of the face, to provide symmetry to our cheekbones.

While Tassone was completing his portion of the surgery, Galloway began hers, taking out a piece of Wiebold’s fibula. Because it isn’t a weight-bearing bone, the fibula is a good choice for transplants.

After spending a few weeks recovering from surgery, Wiebold went through radiation treatment to reduce the possibility of any stray cancer cells surviving and multiplying. With the help of Mizzou Therapy Services’ speech therapy, he regained his normal speaking voice and ability to swallow. With physical therapy, he regained full flexibility and strength in the leg where the bone was removed. As a devoted member of the Human Performance Program’s Fit for Health workout group, he built enough endurance to complete a 5K race one year after his surgery at age 72.

Follow-up scans have detected no signs of cancer. Wiebold is back to gardening, doing part-time work as a “missionary of the soybean” and venturing off the beaten path to visit Missouri wineries.

“I can’t think of a thing I can’t do now that I could have done before,” he said.

Wiebold has confidence to meet new people in part because he got such a good cosmetic result from surgery. He looks almost the same as he did before.

“The first time I talked to Dr. Tassone, I asked, ‘Will I still have a face when we get done?’ When I look back, it seems pretty trivial, but that is an important part of it,” he said. “When I tell people about the surgery, they don’t believe it. It’s science fiction to them. Everyone that looks in my mouth is amazed and compliments the skill Dr. Tassone and Dr. Galloway had in taking me apart and putting me back together.”

What You Need to Know About Head and Neck Cancers

Symptoms can be a lump or swelling in your neck, difficulty speaking or breathing, loose teeth or persistent pain in your mouth, throat or nose.