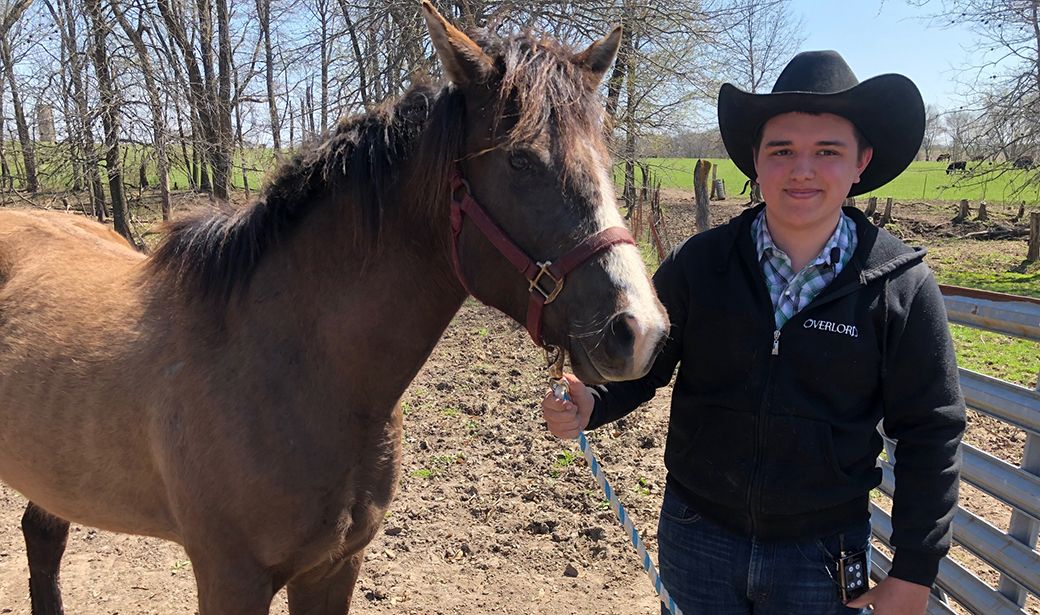 Larry Cordray usually feeds the livestock on his family farm near the north central Missouri town of Browning when his 19-year-old son, Ellis, isn’t home. But as he looked out a window of his two-story brick home on a snowy morning in November 2018, Larry decided to stay inside and wait for his son to arrive.

This would be a good opportunity to teach Ellis how to feed the family’s 75 angus cattle and 25 American quarter horses during a snowstorm. Those horses included Ellis’ favorite, a 3-year-old named Jules.

Ellis knew the heavy snow would make the rural roads treacherous. He left his part-time job at a nearby hog farm early to be home by noon. While cresting a hill, he lost control of his Chevy Silverado truck on the slick blacktop. The truck flipped, and Ellis was thrown from the vehicle. He blacked out.

“I woke up lying in a ditch to the sound of music on the car radio,” Ellis said. “I tried to stand up, and I got halfway there, but I fell back down. That’s when I reached for my phone. Luckily it was in my pocket and still working.”

The Cordrays have spotty cell service, so they installed a signal booster in their home. If Larry had gone outside to feed the livestock, he likely wouldn’t have received that unforgettable call at 12:46 p.m.

“It’s hard to tell how long it would have taken an ambulance to find him,” Larry said.

Larry quickly made the 5-mile drive to the crash site. There, he found Ellis lying in the snow, 20 feet in front of the truck, wearing only one boot. The other was still wedged inside the truck between the dashboard and the steering wheel.

“He hollered at me, and I told him to just calm down,” Larry said. “I wanted to make sure he could feel his legs, made sure he wasn’t bleeding anywhere before I got him up and into the truck. I was afraid hypothermia would set in if we waited for an ambulance.”

Larry drove Ellis to the nearest hospital in Milan. It’s usually a 10-minute trip, but it took 40 minutes in the storm.

X-rays confirmed Ellis fractured his spine in two places and also had a broken arm. He needed treatment at MU Health Care’s Level 1 trauma center, which is staffed and equipped to quickly treat the most severe injuries. Ellis endured a five-hour ambulance ride through the snow strapped to a backboard. He called it the longest ride of his life.

“I just wanted the pain to stop,” he said.

“Seventy-five percent of the time, patients with this kind of injury are not able to move their legs,” Mesfin said.

During the two-hour procedure, Mesfin used rods and screws to stabilize the fractures in Ellis’ thoracic and lumbar spine. Then he coated the hardware with a newly FDA-approved biologic agent called Nanofuse to help grow bone around the braces. Once the biologic agent is inserted, body fluids hydrate the bioactive glass and the surface of the braces become coated with a layer of a mineral called hydroxyapetite. New bone starts forming around the glass fibers, eventually taking the place of the glass particles.

“Nanofuse is a synthetic bone graft that allows us not to use cadaver bone, and it has a high rate of fusion, so patients are able to grow their own bones in a short period of time,” Mesfin said.

The bioactive glass is made exclusively in Rolla, Missouri, by Mo-Sci Corporation, whose chief technology partner is Missouri University of Science and Technology.

Missouri S&T is finding new applications for bioactive glass in wound care, cancer treatment and orthopedics. It was the bioactive glass application in Ellis’ spine surgery that contributed to his ability to take his first steps in the hospital just one day after surgery. Six days after his accident, Ellis returned home to Browning and the horse that now inspires his recovery.

While Ellis likely won’t be able to train or ride Jules for many months, he sees her as a partner in rehabilitation. Therapists gave him exercises to gradually stretch and strengthen his back. He now spends his time grooming, feeding and walking Jules around the property, careful not to lift more than 30 pounds. But he can’t wait to get back to training her for riding.

“Training with Jules is part of my goal to get better,” Ellis said. “It’s something to work toward. As soon as the doctors say I can, I’ll get back to working with her.”