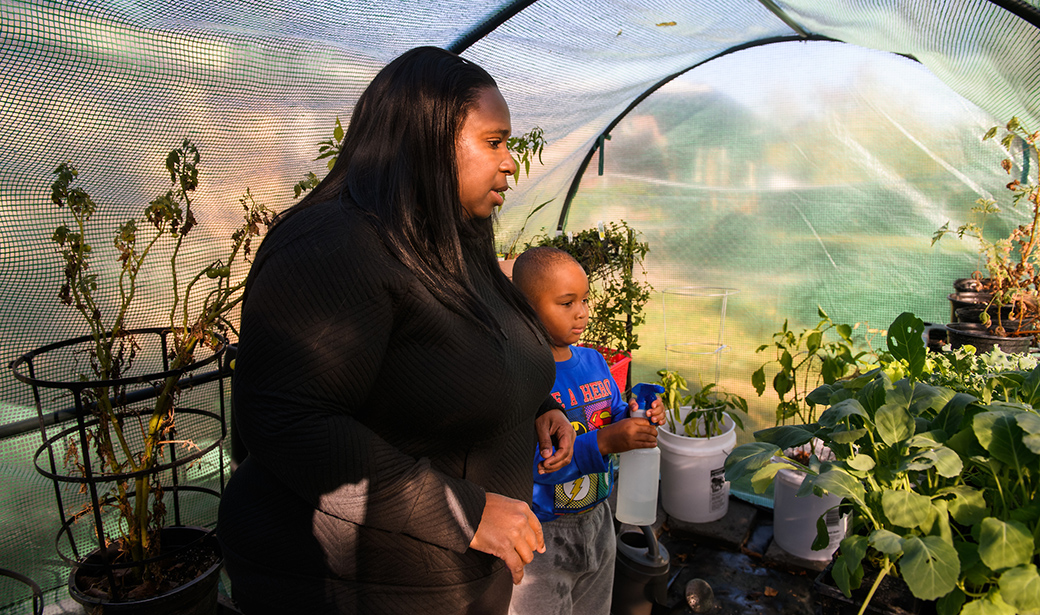 Enjoli Dixon’s schedule doesn’t include much downtime. She has two energetic sons — 8-year-old Carter and 4-year-old Kennedy — and she keeps them busy with Cub Scout meetings, baseball and soccer games and swimming at the YMCA. They even help her maintain the family’s backyard garden in Jefferson City.

“We’ve started growing more and more things,” Dixon said. “I’m raising them to be healthy and know where their food comes from.”

She doesn’t take any of those busy mom moments for granted, because a few years ago, she was a prisoner of pain. Starting in 2017, when she was stressed or too active, she would experience a stabbing sensation in her left cheek. Sometimes she had to pull over while driving because of sudden pain. Eating or drinking cold liquid hurt, as did brushing her teeth and putting on makeup. If she rolled onto her left side in bed, she woke up in agony, so she had to sleep sitting up.

“I couldn’t even smile because it would just be painful,” Dixon said.

She thought it was a dental problem, and even had a tooth pulled, but the pain persisted. Eventually, Dixon saw an oral surgeon in Jefferson City, who determined she actually had nerve damage. Dixon was referred to a neurologist at Capital Region Medical Center — a partner of MU Health Care — where she was diagnosed with trigeminal neuralgia.

In some cases, the condition can be managed with medications that are commonly used to treat epilepsy. Those drugs didn’t work for Dixon. She also tried injections to numb the nerve, but they didn’t provide long-term relief. At that point, during the summer of 2019, Dixon decided to explore the possibility of surgery. She was referred to neurosurgeon Thorkild Norregaard, MD, at MU Health Care.

After discussing Dixon’s options with her, Norregaard performed a procedure called microvascular decompression in August 2019. He opened a thumbnail-sized hole in her skull right behind her left ear. He didn’t cut through brain tissue, but rather lifted the cerebellum to create space to maneuver his instruments to Dixon’s trigeminal nerve. Norregaard then placed a piece of surgical felt between the nerve and the intruding blood vessel to serve as a cushion.

The procedure took about two hours. Dixon spent three days in the hospital for observation. Norregaard said the surgery corrects the problem about 95% of the time and the change in quality-of-life is dramatic.

“When I see people in follow-up two weeks later,” he said, “they’ve generally completely recovered and are back to doing their usual activities.”

After surgery, Dixon needed physical therapy to regain her balance and refocus her vision. She found that gardening was a great way to stay active while getting back to normal. Dixon learned to garden from both of her grandfathers, and she is passing it on to her sons. They enjoy helping her tend vegetables and herbs year-round in their greenhouse.

Dixon also shares her love of gardening with a wider audience. She started a Facebook group called “The Blue Thumb (Zetas Growing Together),” which is open to all members of Zeta Phi Beta Sorority, Incorporated. The group has grown to more than 300 members who share gardening tips and recipes. She is the community planning consultant and a board member of the Ubuntu Community Garden in Jefferson City, which was created in a neighborhood struck by a tornado in 2019. She even started a home business called POSH POTS that sells planter pots that she designs.

“Gardening is kind of like my therapy,” she said.

The pain that held her back for two years is now in the past, and she is back to enjoying her busy days with her two boys.

“It’s been wonderful,” Dixon said. “I can brush my teeth normally. I can eat normally. And I can smile.”