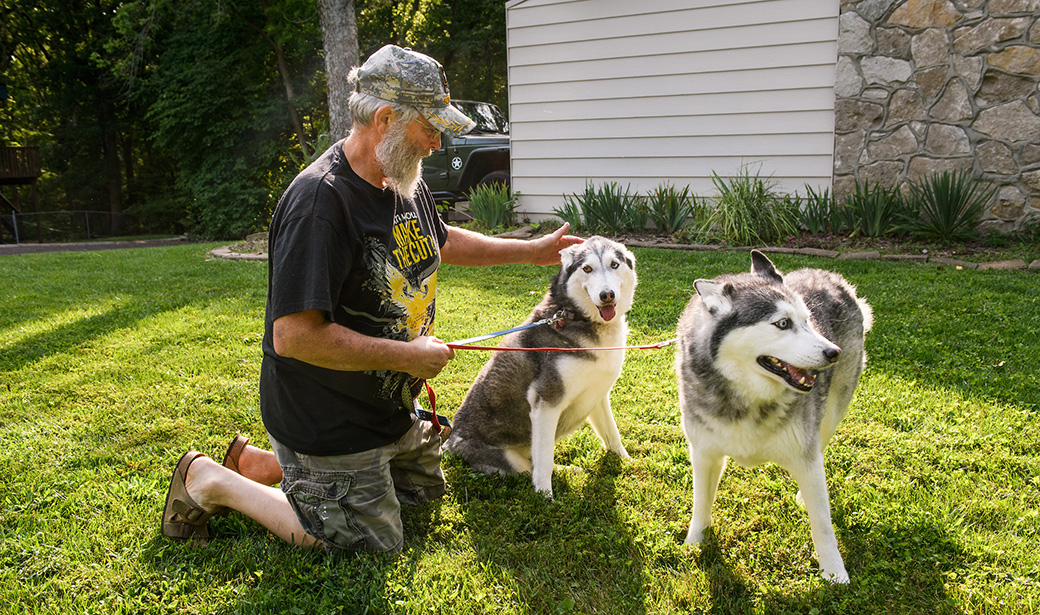 If you have suffered from temporary symptoms such as numbness on one side of the body, difficulty speaking or understanding, dizziness or vision problems, it could be a sign of a serious vascular problem that could lead to a stroke. Make an appointment with a vascular specialist at muhealth.org/vascular-form or by calling 573-882-6500

Kevin Bowers has a soft spot for dogs with a few miles on them. It’s an interest he shares with his daughter, Kelly. Between them, they’ve adopted four rescued huskies — Caesar, Pipaluck, Illy and Bullet — and only Bullet has all four legs.

Bowers can relate to those hobbling dogs. Scar tissue might be the only thing holding him together.

“I’ve had 18 broken bones, more than 400 stitches, eight concussions, two bouts of cancer. I could go on,” he said with a laugh. “The military beats up your body.”

In addition to the scars, his 23 years in the Army gave him a sense of purpose that stuck with him long after he completed his service.

As Bowers, 61, drove from his home in Rolla to his daughter’s house in Columbia on a Friday evening in March, his mission was clear: He had agreed to pet-sit Illy and Bullet for the weekend, and he intended to do just that.

During the trip, Bowers developed a crushing headache and temporarily lost vision in his left eye, but he kept going. When he arrived at his daughter’s house, he put an ice pack on his head and soldiered on. The symptoms returned even worse the next day and then again after he returned home.

Bowers finally accepted that this was a serious problem, not a distraction. He visited his doctor at Fort Leonard Wood and learned he was suffering mini-strokes. Bowers had carotid stenosis — plaque buildup in one of the neck arteries that supplies blood to the brain. Small particles or clots were breaking off and temporarily clogging smaller vessels leading to his eye and brain.

Left untreated, people with symptomatic carotid stenosis have a 1-in-3 chance of suffering a massive stroke within a year.

Kelly Bowers, DO, a resident physician in the MU School of Medicine’s Department of Pathology and Anatomical Sciences, recommended her father see MU Health Care vascular surgeon Todd Vogel, MD. Vogel and his colleagues perform more than 100 carotid artery procedures per year, but Bowers’ case was one of the most challenging because his neck tissue was damaged by the radiation treatment he received for tonsil cancer six years ago.

“Any path the radiation has gone through to get to the tumor creates severe scarring, so your neck becomes almost like wood. It’s very, very hard to do surgery on a radiated neck,” Vogel said. “I don’t offer surgeries I don’t think I can do, but there was risk to this one. But because he was having symptoms, his risk of having a stroke if we did nothing was greater than the risk of the surgery.”

The gold-standard treatment for carotid stenosis is called an endarterectomy. A surgeon makes a large incision in the neck to access the artery and cleans out the plaque. That wasn’t an option for Bowers because of the scar tissue in his neck. An alternative to open surgery is a catheter-based procedure in which a stent is placed in the artery. But a traditional stent procedure comes with its own risks, as patients can suffer strokes if plaque is dislodged when the stent is inserted.

For the last two years, Vogel has been performing a new stent procedure called TCAR — transcarotid artery revascularization — that minimizes the risk of stroke. TCAR was the solution to Bowers’ problem.

Vogel made a small incision above Bowers’ collar bone and worked around the scar tissue to insert a catheter into the carotid artery below the blockage. The catheter was part of a circuit that reversed the flow of blood away from the brain, filtered it and returned it to the femoral vein in the thigh. Vogel then inserted a stent through the catheter to reopen the blocked carotid artery. Any plaque fragments that came loose were trapped in the filter before the blood re-entered Bowers’ body through his leg.

The procedure went smoothly, and Bowers went home after staying one night in the hospital for observation. He is a man on a mission again, even if his mission is just a walk around the block with his three-legged friends.

“I’m 100% pleased,” Bowers said. “Dr. Vogel told me before surgery this was going to be a hard thing to do. He had a job. I’m not sure I would have taken that job myself if I was him, knowing that the tissue was damaged and if you make a cut there, it might not heal. But sure it enough, it healed up. Now, it’s just another battle scar.”