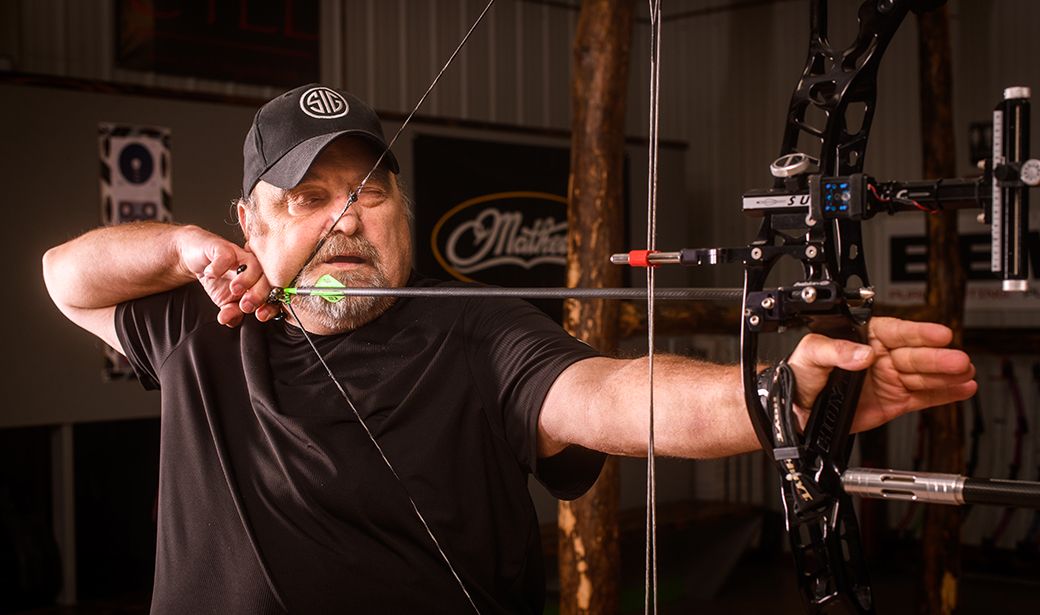 Rick Wilson has been a tournament archer for more than 30 years. The 63-year-old Macon resident participates in about a dozen tournaments per year. He enjoys walking through the outdoor courses and taking aim at three-dimensional foam animal targets.

And it was his love of the sport that helped him recover after a colorectal cancer diagnosis in 2012. Two years into his treatment with cancer, feeling worn down, Wilson turned his sights to archery as a way to rejuvenate his spirits.

When he first picked up his bow after two years away, he was too weak to draw the string. It was one of his lowest points, but it also gave him a goal — to compete in an archery tournament in Durham, Missouri, at the end of summer 2014.

Wilson set aside time each day to practice. He had to reduce the draw weight — the mechanism that controls the string tension — as far as it would go.

“It took me a month to get to where I could really draw it,” Wilson said. “But then, slowly, I could finally shoot again.”

Wilson suspected he had a health problem in the summer of 2012 because of a change in bowel habits — a common symptom of colorectal cancer. Unfortunately, by the time he was diagnosed, the cancer had reached Stage 4, having spread to his lymph nodes.

“We recommend people who have an average risk of colorectal cancer have a colonoscopy beginning at age 45,” said Zihao Wu, MD, a colon and rectal surgeon at University of Missouri Health Care’s Ellis Fischel Cancer Center. “If you have a genetic syndrome in your family like Lynch syndrome, or Crohn’s or ulcerative colitis, or are African-American, you might need to begin screening earlier.”

Because colorectal cancer is a slow-growing cancer, what starts off as a polyp and eventually grows into cancer can routinely be removed during a colonoscopy. That’s why it is important to follow the screening guidelines.

Colorectal cancer is the third-most common cancer in the United States, but lifestyle choices can reduce the risk. Wu suggests a healthy, high-fiber diet and exercise to maintain a healthy weight. Smoking is also a risk factor, so cutting the habit helps, too.

Once diagnosed with colorectal cancer, patients at Ellis Fischel have access to a team of specialists.

“We have medical oncology and radiation oncology all working together to help treat patients, and that makes all the difference,” Wu said. “Rick is a good example of someone who had Stage 4 colorectal cancer and never lost hope in our team.”

Wilson had surgery to remove the tumor and began 28 treatments of radiation in July 2012. When that was done, he began chemotherapy.

“The worst part about the chemotherapy was the side effect I called the ‘cold thing,’ ” Wilson said. “I love my ice water, my cold drinks , and it was like I swallowed a porcupine.”

But the chemotherapy did its job. And by the summer of 2014, Wilson was slowly building strength for his big comeback.

At the Durham tournament, Wilson remembered struggling early but working his way back to his old self throughout the competition. Even the warm late summer day couldn’t keep him from having a good time doing what he loved.

“I was grouped with my good friends who I typically shoot with,” Wilson said. “We walked through the woods, shooting at 30 targets along the way. This tournament had foam animals, both common and exotic such as skunks, raccoons, deer, bears, but also hyenas, blackbuck — an Asian deer — to spice it up.”

The tournament took Wilson and his competitors around three hours to complete. It had been a long road to get back into his old routine, and he walked away with the win. Celebrating with his close friends and fellow archers made the moment more special.

“That win was one of the most important ones of my life,” Wilson said. “I was finally me again. It was a culmination of beating cancer, in my mind.”

“It was an awesome day when they told me I was cancer-free,” Wilson said. “I couldn’t have been happier. I was excited to think about all of the upcoming archery tournaments I could finally be a part of again.”