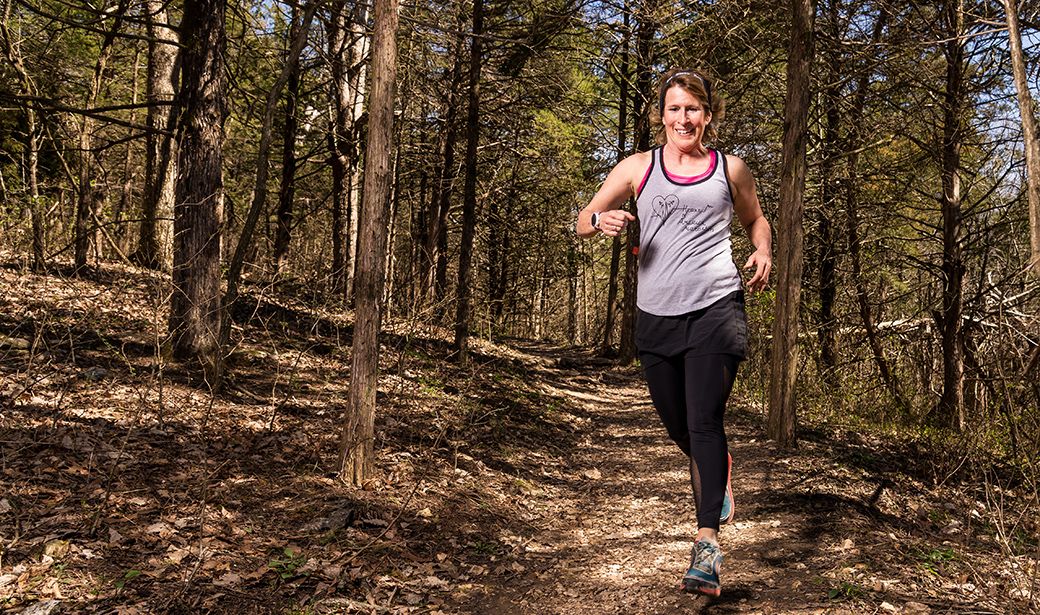 Michele Baumer, 57, is back to running long distances after a traumatic injury left her with a collapsed lung.

Michele Baumer had just been smashed by a gasoline tanker truck, she was covered in glass and her right lung was collapsing. An EMT slipped into the passenger seat of her Toyota Corolla and asked if there was anything he could do before she was cut out of the car and hustled to the emergency room.

“Yes,” she said, handing him her phone. “I need you to call my office because I’m facilitating a meeting and I’m going to be a little late. So if somebody could just start the meeting for me …”

And that’s when her coworkers at the Missouri Department of Conservation realized it would take more than a traumatic injury for their public involvement coordinator to cancel a meeting.

Baumer, a 57-year-old Columbia resident, jokes about the story that made her an office legend, but her actions that day weren’t out of character. Behind her perpetual smile and easy laugh is a determined woman. If she vows to do something — such as running a marathon seven months after a devastating injury — she will do everything in her power to follow through.

Baumer started running seriously 10 years ago after a discussion with her sons, Joshua and Samuel, who are both runners. They told her she didn’t understand how hard it was to train for a race. She agreed, and then she told them she would run a 5-kilometer race that year, a 10K the next year, then a half-marathon and finally a marathon when she was 50 years old.

She did it all, and she kept going.

On weekdays, Baumer rises before dawn and trains with her running friends at 5 a.m. On Saturdays, she takes long jaunts on the hilly trails at Rock Bridge State Park. If she starts to fall behind her training partners, many of whom are decades younger, she draws upon her knowledge as a naturalist and suggests everybody pause for a moment to appreciate the beauty of the bluebells on the right or sample the wild raspberries on the left so she can catch her breath.

“They say, ‘If you’re looking at nature, you’re going too slow,’ ” Baumer said.

On the morning of Jan. 23, 2018, she finished a 5-mile jog, showered, fixed her hair and put on a nice dress to make a good impression at the meeting she was scheduled to lead. Baumer was just south of Columbia heading toward Jefferson City on an access road to Highway 63. She looked ahead and saw a westbound car run a stop sign and collide with a northbound tanker truck. She pulled onto the road’s shoulder to see if she could help, but the careening truck couldn’t avoid her.

Baumer thinks her lung tore when her body strained against her seatbelt on impact. A collapsed lung — also known as a pneumothorax — allows air to seep into the space between the lung and chest wall, which makes breathing difficult. She initially didn’t realize she was hurt, telling first-responders to check on the other drivers. But when she stopped responding to the EMTs’ questions, they knew they needed to cut off the driver’s side door and extract her quickly.

Baumer was taken to MU Health Care’s University Hospital, mid-Missouri’s only Level 1 trauma center, which is staffed and equipped to quickly treat the most severe injuries.

“A pneumothorax can be life-threatening,” said MU Health Care trauma surgeon Jacob Quick, MD. “If you don’t evacuate the air, it can eventually put pressure on your heart and can kill you. It’s an emergent process that can take anywhere from minutes to hours to get worse. She was coming from the scene, so she didn’t have it for long, but it was already taking effect on her. She was having a tough time breathing.”

Quick and his team made an incision between the ribs on her right side and punctured the chest cavity to allow the air to escape. Then they inserted a chest tube that continued to drain the air for the next few days while the lung wound healed.

“She was just very involved in her care and pleasant about everything,” Quick said. “She took a keen interest in what she needed to do to get better, which really did help her. She got up and got moving early, and some of that goes with her fitness background.”

Baumer’s health care team soon identified Baumer as an unusually grateful patient. Thanks to her old training schedule, she was alert and chatty at 4:30 a.m. when resident physicians did their rounds. She kept a bowl of candy by her bed to offer every doctor and nurse who visited. She said she paused on her frequent hospital walks with her husband, Clif, to appreciate seemingly ordinary things — what a great gift shop, what a nice courtyard — while her room filled with so many flowers from well-wishers that barely any surface area was uncovered.

Four days after her accident, her lung had healed enough for the chest tube to be removed. Two days after that, she was released.

“My whole experience was amazing,” Baumer said. “I have complete high regard for the trauma team. I wrote 61 thank-you notes. It really does take a lot to keep Humpty Dumpty alive and a lot to put me back together again.

For Baumer, getting back to normal meant running long distances. She set a goal to continue her tradition of running the Heart of America Marathon on Labor Day in Columbia. Her training partners soon learned what her coworkers already knew — Michele Baumer sticks to the plan.

The HOA is considered one of the nation’s hardest marathons because the course is so hilly and the heat and humidity is often oppressive. Baumer completed the event, and her time was just 26 seconds slower than the year before.

“When I finished that marathon, I called myself healed,” she said.

Now, Baumer has a new long-term goal. She figures if she can hang in there until age 80, she will meet the age-group qualifying standard for the Boston Marathon. She has a few decades to train. Don’t bet against her crossing the finish line in 2042.