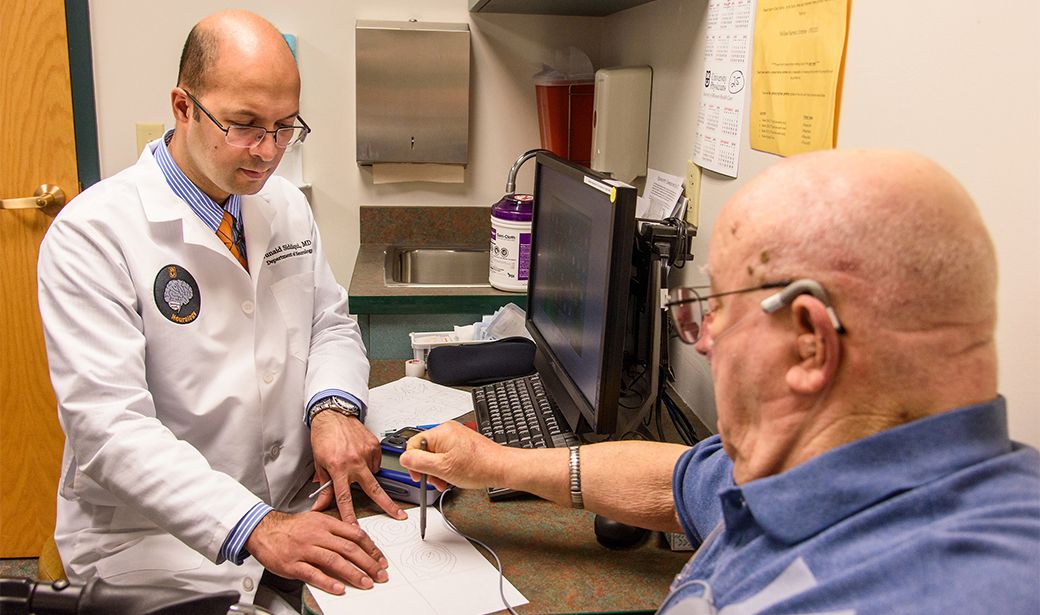 Michael Ladish first noticed his hands shaking about 16 years ago. The tremor started in his right hand then progressed to the left, until “both of ’em were doing the hoochie coochie,” he said.

The shaking made it difficult for him to hold a drink without the glass bouncing off his teeth. Sometimes he spilled the liquid before it even reached his mouth.

Eating was just as challenging. Although typically not one to worry about people staring, the retired Air Force veteran still felt self-conscious, “especially when I would have the knife and fork trying to cut and they would do a dance around on my plate.”

Humor helped him cope, but Ladish, a 79-year-old Sedalia resident, wanted to fix his problem. He suffered from a condition called essential tremor. It is a neurological movement disorder that causes involuntary shaking and often runs in families. The tremors can involve almost any part of the body, including the vocal cords, head, arms and, most frequently, the hands. The symptoms are at their worst when the person is trying to do something such as lift a cup, cut food or point at an object. The shaking does not occur — or is less pronounced — when the body is at rest.

Essential tremor is the most common movement disorder, affecting up to 10 million people in the United States, according to the U.S. National Library of Medicine.

The condition isn’t life-threatening, but symptoms worsen over time, making everyday activities progressively more difficult. At the same time Ladish was having difficulty taking care of himself, his body couldn’t tolerate the medications used to treat essential tremor because of his other medical conditions.

He remembered a report he saw on television about a unique treatment that could stop the shake called deep brain stimulation or DBS. To find relief, Ladish chose University of Missouri Health Care and scheduled an appointment with the neurology team.

DBS uses electrical impulses to stimulate a target area in the brain. The stimulation affects movement by altering the activity in that area of the brain. The procedure does not destroy any brain tissue. And stimulation can be changed or stopped at any time.

Ladish underwent surgery in February and March of 2018. In the first phase, Thorkild Norregaard, MD, a neurological surgeon, implanted a tiny wire — the DBS lead — with several electrodes in Ladish’s brain. The lead feeds down the neck under the skin into the upper chest.

During the surgery, Ladish was awakened once the lead was in place so Norregaard could test it to “ensure there were no side effects from stimulation,” he said. After Ladish had time to heal, Norregaard completed the second surgery, which involved implanting a battery known as a pulse generator that connects to the electrodes.

Norregaard, who performs about 20 DBS surgeries a year, said it’s “profoundly gratifying” to help alleviate symptoms for patients like Ladish.

A few days after the second surgery, Ladish met with Junaid Siddiqui, MD, a neurologist specializing in movement disorders, who turned on the pulse generator for the first time.

“It was magical — instantaneous improvement right in front of your eyes,” Siddiqui said.

To achieve the best results, Siddiqui methodically adjusted a variety of electrical settings so the device delivered the correct level of stimulation.

“Each part of the lead is in contact with a certain part of the brain. When each contact is stimulated, it generates a current depending on which contacts we decide to stimulate,” Siddiqui said.

To evaluate Ladish’s progress, Siddiqui gave him pen and paper and asked him to draw spirals. After a series of adjustments to the pulse generator, the squiggly lines that Ladish drew turned into spirals. Then Ladish accomplished a skill he hadn’t been able to do for more than 10 years — he wrote his first name.

The DBS settings can be adjusted as the disease progresses. Ladish has control at his fingertips thanks to a handheld programmer. It allows him to turn the device off or on and adjust the voltage by selecting between two or three programs preset by Siddiqui.

While DBS is an effective way to relieve the shaking, not everyone is a candidate. Currently, it’s only FDA-approved to treat essential tremor, Parkinson’s disease and dystonia for patients whose symptoms cannot be controlled with medication. At MU Health Care, a multidisciplinary team evaluates each potential DBS candidate to measure the potential impact on cognition and mental health to determine if it’s an appropriate treatment.

Ladish is grateful for the relief. He now enjoys eating without his silverware dancing around the plate and drinking without worrying his glass will chip a tooth.

“It’s immensely easier than what I was doing before,” he said. “I’m just thankful I got it.”