Foot Drop Surgery Helps Illinois Woman Get Back on Her Feet 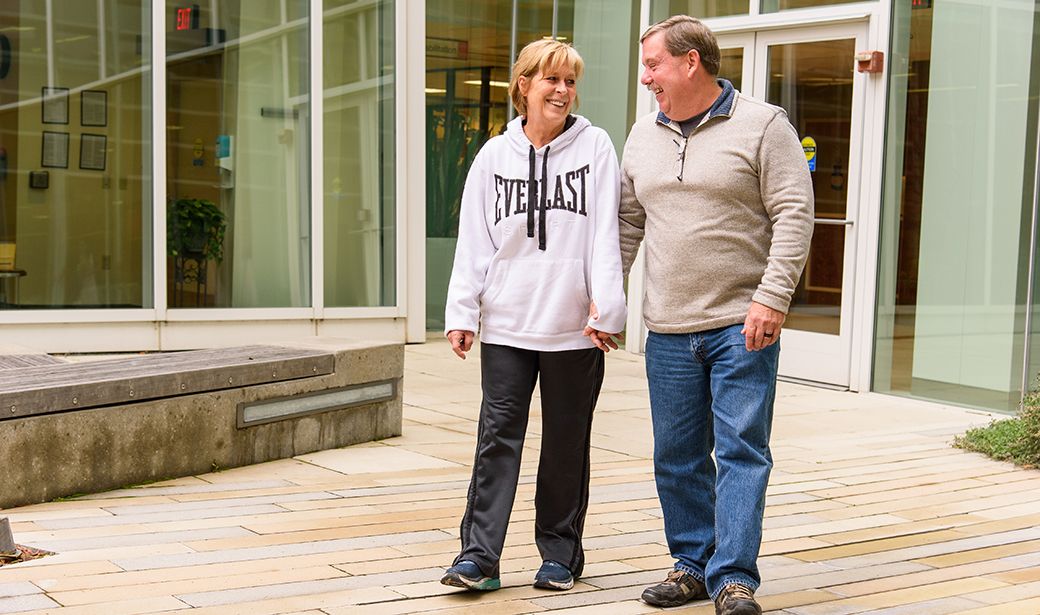 Jennifer Benjamin is able to enjoy walks with her husband, Mike, after recovering from traumatic leg injuries she suffered when a horse fell on her in 2014. MU Health Care’s Kyle Schweser, MD, performed tendon transfer surgery that fixed Benjamin’s foot drop condition, which was one of her last barriers to walking again.

Jennifer Benjamin has been raising horses since childhood. Caring for them is an investment of time, effort and passion. It can take months to properly break in a horse for riding, so the Payson, Illinois, resident knows how to patiently work toward a goal.

After a traumatic injury left her unable to walk or ride, her patience and perseverance were tested.

On June 1, 2014, a friend was attempting to ride a horse that Benjamin had trained. The horse got spooked and began to jump. The 1,500-pound animal fell onto Benjamin’s left leg, shattering her tibia and fibula and tearing her ACL and other ligaments.

Her husband, Mike Benjamin, the fire chief in nearby Hannibal, Missouri, ran to her aid. Mike picked her up and drove her to Hannibal Regional Hospital’s emergency room. They feared she might lose her leg.

She was stabilized in Hannibal and transferred to University of Missouri Health Care’s Level 1 trauma center. When she learned there was a chance she could save her leg, Benjamin was determined to do whatever it took for as long as it took.

Benjamin needed a series of surgeries on her leg to heal the damage. Mike was there every step of the way, taking time off work to be with her after each surgery and handling chores she had once managed.

“It was hard for me to see her like that,” Mike said. “She is always so strong.”

He did what he could to lift her spirits, helping her laugh through the toughest times.

“He’s quite the corker, so he kept me going,” Benjamin said.

After four years and 10 surgeries, she was almost ready to walk again. But a condition known as foot drop was preventing her from receiving the knee replacement needed to continue her recovery.

“One way a foot drop occurs is after someone sustains a fracture or dislocation around the knee. The nerve that controls the motion on the muscles on the top of your foot is damaged, affecting your ability to lift your foot,” said MU Health Care orthopaedic surgeon Kyle Schweser, MD.

Patients don’t regain full range of motion, but they can lift their feet up to clear the ground in a more natural way.

The first two weeks after surgery, patients are immobilized to prevent injury before being fitted for a cast that stays on for about five weeks. When the cast is ready to come off, patients are fitted with an ankle-foot orthosis (AFO). This is a brace that fits inside a shoe and helps hold the injured foot at a 90-degree angle. Once fitted for an AFO, patients begin physical therapy to work on the ankle range of motion and some gentle retraining to lift the foot on their own.

“After about 10 weeks, I check the patient’s progress and from there allow them to start walking with their AFO,” he said. “Three months out from surgery is typically when the patient is able to walk without their AFO.”

In August 2018, Benjamin received her knee replacement, the final surgery planned. Three months later, she met with Schweser to check the progress gained from the foot drop surgery.

“I couldn’t sleep the night before my appointment with him,” she said. “I was so excited to be able to show Dr. Schweser how I could walk into my follow-up without a cane. Because of him, I could have the knee replacement surgery done to save my leg.”

Benjamin and her husband walked out of the appointment together, reflecting on the past four years. Her determination to succeed had paid off. The two playfully teased each other about the difficulty of the journey, but it was clear that the love between them was her greatest support.

She continues to do physical therapy exercises on her own at home and remains passionate about her horses.

“I go down to the barn and spend time with them as much as I can,” she said. “I’m hoping that maybe someday I’ll be able to ride again. But for now, I’m just grateful to be able to walk.”