With the Help of BioJoint, Hallsville Woman Remains Active as Ever After Car Accident 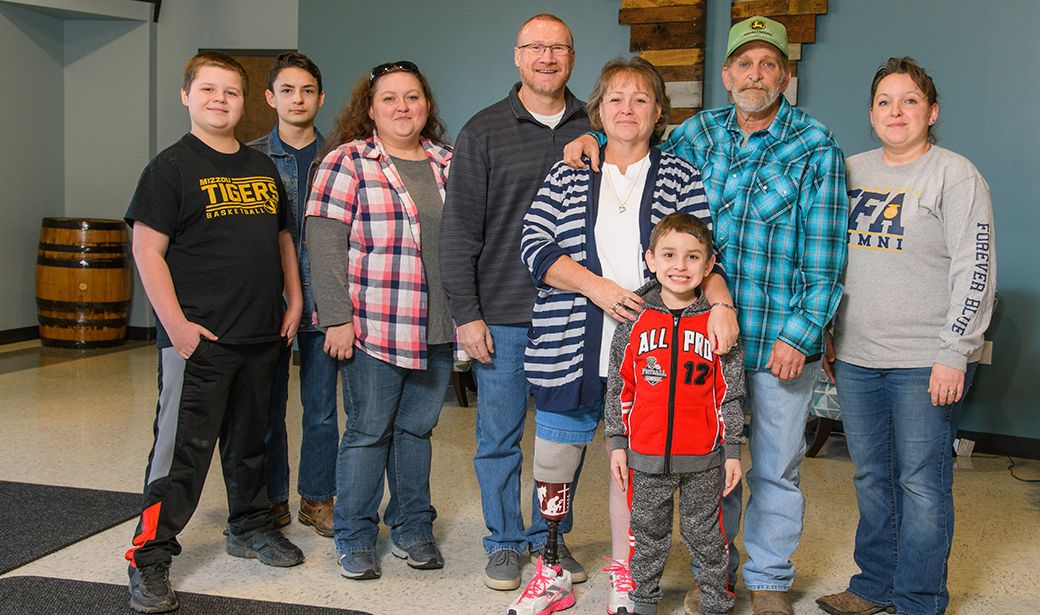 Hallsville resident Pamela Black, third from right, lost her right leg below the knee after a car accident. She was able to avoid an amputation above the knee thanks to an osteochondral allograft transplant at the Mizzou BioJoint® Center and is now able to enjoy family time and volunteer as a greeter at Rocky Fork Fellowship church.

Since a devastating car crash in 2005, Pamela Black has endured 15 operations. She lost her right leg below the knee. Her sense of humor, however, remains intact.

“You have to laugh,” said Black, 54, a resident of Hallsville, Missouri. “My little brother, since the amputation, has called me ‘Peg-Leg Pammy.’ If you don’t have fun with it, you’re just going to be bitter. My daughter found a shirt that says, ‘Just Pulling Your Leg.’ I get the most comments when I wear that shirt.”

Finding peace with her condition was made easier by MU Health Care’s Mizzou BioJoint® Center, whose doctors performed a successful procedure in 2017 that saved her right knee above her amputation.

The Accident
In 2005, Black, a mother of two, worked as a branch manager for a home health care company in Columbia. The job required her to be on call 24/7, ready to fill in if a patient’s caregiver didn’t show up.

Black was talking on the phone to her secretary from the passenger seat while her husband, Scott, drove. While the Blacks traveled southbound, a car headed north crashed into them. Her right knee was thrust through the glove compartment on impact. The secretary heard Black telling her husband she couldn’t feel her leg. The secretary called 911.

The diagnosis was grim. Her leg and foot were separated inches above the ankle. After several surgeries that Black hoped would salvage her leg, she made the difficult decision to proceed with amputation in 2008.

Black described the pain after her amputation as “horrendous.” Her damaged knee and prosthetic leg proved to be a bad combination. Amplifying her discomfort was a nerve disease — reflex sympathetic dystrophy, or RSD. Adjusting to life in perpetual agony meant she couldn’t spend much time outdoors with her six horses or even go to some of her favorite restaurants that weren’t accessible.

Eight years after the amputation, Black faced two options: live with the pain or amputate the right knee.

She discussed the matter with Joseph Burris, MD, an amputation rehabilitation expert who had worked with her for several years at Rusk Rehabilitation Hospital, an affiliate of Encompass Health and MU Health Care. Before making a final decision, Black reached out to MU Health Care’s Parvin Behrouzi-Jareh, FNP, a nurse practitioner who specializes in orthopaedic foot and ankle care. Behrouzi-Jareh, who assisted in Black’s treatment since the accident, suggested a third option.

The Journey to Recovery
In January 2016, Black had an appointment with the BioJoint team to evaluate her knee. James Stannard, MD, told Black she was a candidate, but, in her case, there was a 50-percent chance that the procedure wouldn’t work.

“I felt we needed to try it because the alternative would be an amputation above the knee, and I didn’t want to do that,” Black said.

On May 21, 2016, Black became the first amputee to have surgery at the Mizzou BioJoint® Center.

For most BioJoint knee patients, the recovery process involves increased use of the leg through physical therapy and the wearing of a knee brace. For Black’s unique situation, the recovery process had to be modified. The BioJoint team fitted her with a custom brace and worked with Behrouzi-Jareh and MU Health Care’s physical medicine and rehabilitation team to design a therapy program to address pain, knee function and BioJoint graft-healing in a below-the-knee amputee.

Within three months, she was able to use her prosthetic leg again. Battling RSD remains a challenge, but this is the best Black has felt since her accident. She credits her husband, daughters Jessica Estrada and Amanda Wright and Rocky Fork Fellowship pastor Mark Butrum for providing the support she needed to recover.

As evidence of her dramatic improvement, look no further than the eight-plus acres of lawn Black mows on her family’s property. Her husband recently presented her with a choice of a remodeled kitchen or a new lawnmower.

“I want that big John Deere zero-turn mower,” she told her husband. “It gives me something I can do, even with my disability.”

Mowing gives Black plenty of time — typically about eight hours — to reflect on her journey. Even though life is different, she is still the goal-oriented person she was before the accident. Black has already established her next goal: to fulfill a promise to her 12-year-old grandson, Ethan Estrada, to climb and descend the stairs to the entrance of the Devil’s Icebox cave at Rock Bridge Memorial State Park.

Black is confident that one day soon, she and her grandson are “going to walk those stairs together.”