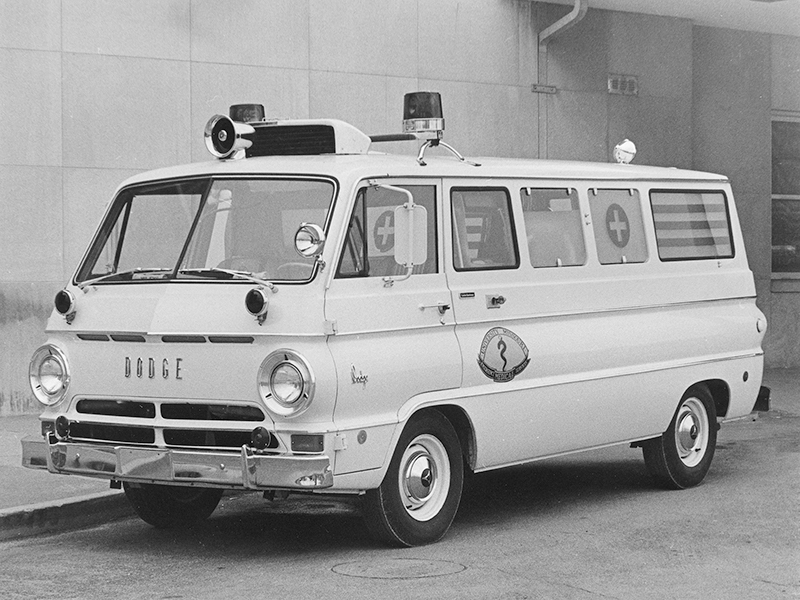 Fifty years ago, on June 8, 1968, MU Health Care fired up the engine on its first ambulance, a new Dodge van nicknamed “Arnold.”

In the week before the first call, an article in the Columbia Missourian newspaper said the primary purpose of the ambulance service was to provide state-wide training for ambulance attendants and to study methods of improving emergency care.

“However, the emergency vehicle will respond to calls on a 24-hour basis in the area surrounding Columbia,” the article said.

The first batch of 10 driver-attendants were trained for two months by Frank L. Mitchell, MD, the namesake of MU Health Care’s Level I trauma center.

“Their training and qualifications are far higher than most people would expect,” Mitchell told the Missourian.

Indeed, within a few weeks of launch, ambulance attendants Larry Duncan and Tom Smith were publicly credited with using mouth-to-mouth resuscitation and external heart massage to save the life of a 6-year-old boy who had fallen into a sand bin at a local concrete plant.

Over the years, MU Health Care’s fleet expanded to its current total of 15, which includes 12 that handle emergency calls and three designed for transporting pediatric patients from one facility to another. The ambulance service includes bases at University Hospital, Mizzou North, Woodrail Center and Women’s and Children’s Hospital in Columbia, as well as a base in Ashland.

When an emergency call is received, Boone County Joint Communications dispatches the closest ambulance from MU Health Care or Boone Hospital Center. MU Health Care’s ambulance service gets that dispatch through an iPad app, which provides directions and allows the crew to communicate with the dispatch center.

The cots on the newer ambulances have mechanized lifts to load and unload patients. The ambulances are outfitted with cardiac monitors and ventilators. Emergency medicine physicians often ride along on the more serious calls.

MU Health Care’s ambulance service covers all of Boone County, and its reach extends into other counties if University Hospital is the closest option. MU’s newer ambulances are equipped with four-wheel drive to help reach people in need when the roads are dangerous.

Just as when it began, part of the MU Health Care ambulance service’s mission is developing innovative ways to improve emergency care.

“We do research with our service, because we’re an academic hospital,” said Joshua Stilley, MD, the chief of the MU School of Medicine’s Division of Emergency Medical Services. “So whether we’re trying out new medication strategies or new care delivery systems or looking at what we’ve done in the past to decide what we should do in the future, that gives us a significant leg up in improving care, not just for our patients but for all patients.”