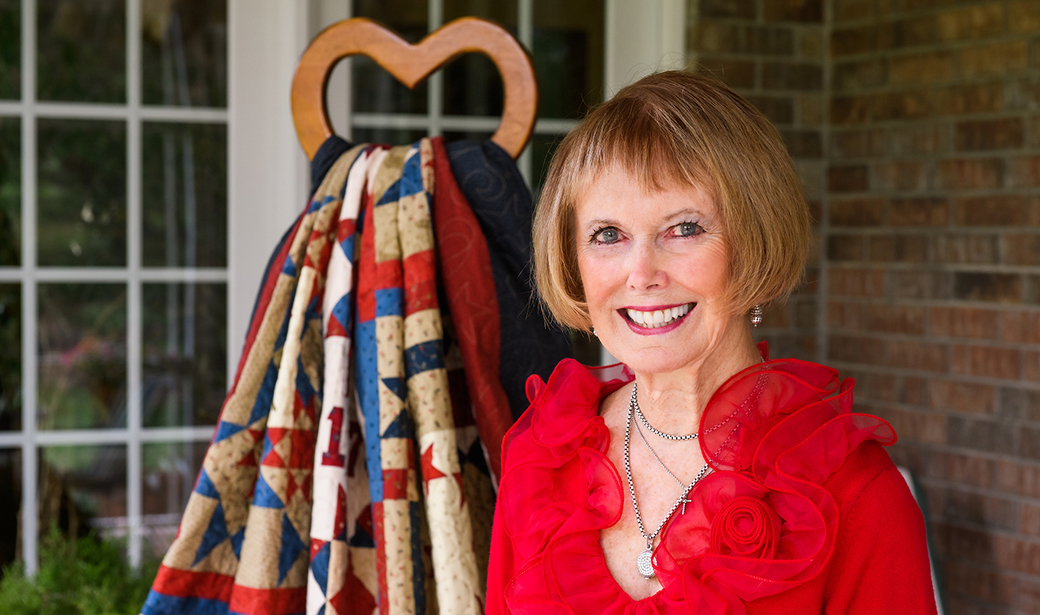 Aneurysms rarely cause symptoms, so they are often discovered during scans taken for unrelated conditions. If you have been diagnosed with a brain aneurysm, you might be a candidate for the minimally invasive WEB procedure. Visit muhealth.org/stroke to learn more or call 573-882-4908 to make an appointment.

In 2002, Jeraldine Hammond visited her doctor in St. Louis seeking treatment for a sore shoulder. An MRI scan revealed an unrelated and far more serious problem.

She had a brain aneurysm.

A specialist told Hammond the location of the aneurysm in the center of her brain would make surgery dangerous. If the aneurysm — a balloon-like abnormal growth in a weakened artery wall — grew and was in danger of rupturing, surgery might be worth the risk. Until then, the best course was to wait, get regular scans and know the symptoms of a rupture just in case.

“He told me not to let it ruin my life,” Hammond said.

She followed that advice as best she could. Hammond returned to work as an elementary school secretary. She resumed her favorite hobbies of quilting, cross-stitch and scrapbooking, which gave her the chance to create keepsakes for her family. She and her husband, Phil, retired and moved to the Lake of the Ozarks area in 2008, and she quickly got busy working part-time at a dress boutique and making new friends at church.

Hammond always got a little anxious before her scans, which were scheduled annually at first and then at five-year increments. But the results were always the same — no change in the aneurysm — including her last scan in 2018.

Hammond was working in her yard on March 29, 2020, when she felt a sudden headache. She went inside to lie down then felt the pain shift to the back of her head. Soon, she was sick to her stomach. She remembered the symptoms her specialist had warned her about and knew this was the moment she had feared.

Her husband rushed her to the emergency room at Lake Regional Health System, where she was diagnosed with a subarachnoid hemorrhage, a type of stroke. She was quickly transferred to MU Health Care’s University Hospital by helicopter. Hammond doesn’t remember that, nor anything else about the next three days.

What Hammond didn’t know was that in 2019, the Food and Drug Administration had approved a new device called the Woven EndoBridge (WEB) to treat certain brain aneurysms. WEB is a soft expandable mesh ball that looks like a tiny ball of yarn attached to a delivery wire. Doctors insert the device through an artery in the wrist or groin, thread it to the site of the aneurysm and deposit it in the neck of the aneurysm. The mesh ball expands to fill the hole and prevents blood from entering the aneurysm.

MU Health Care is the only hospital in central Missouri that performs the procedure. Neurosurgeon Farhan Siddiq, MD, and his colleagues previously had implanted WEB devices in patients whose aneurysms hadn’t ruptured but not on a patient with an active brain bleed. With the approval of Hammond’s husband and daughters, Siddiq performed the procedure. It took just 45 minutes and treated a life-threatening problem.

“She is proof that we can do these procedures, even on patients as they get older, because the procedures are safe and quick,” Siddiq said. “This technology is going to improve aneurysm care.”

When Hammond woke up in her hospital room, she received the best possible news.

“Dr. Siddiq came in and told me they had contained my aneurysm and it was gone,” she said. “This was a very emotional moment for me. I give thanks to God and my doctors for saving my life.”

When she returned home, Hammond got back to work on a patriotic quilt she had begun before the stroke. It was a complicated project that required fitting eight small quilts together to make a bigger one, and she initially struggled to make sense of it. The stroke had caused some short-term memory loss, but she didn’t give up.

“I had quilted for 40 years, and I couldn’t remember how to quilt,” Hammond said. “It was kind of scary. So I got kind of aggressive with it. I have a friend who is a quilter, and I got her to come over and show me. With her help, I was able to put the first piece together, then I got on the internet, and when they would mention a particular technique, I got my quilt books out and looked it up. I kind of retaught myself.”

Hammond finished the patriotic quilt just in time for Independence Day. It was one more keepsake, this one reminding her that she was finally free from the worries she had carried in the back of her mind for 18 years.