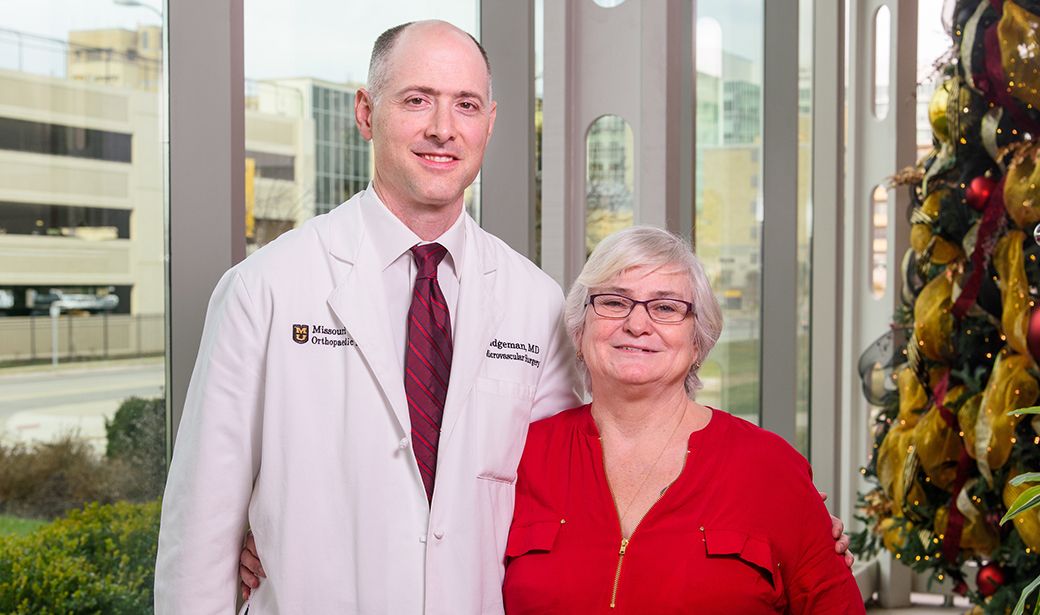 Jay Bridgeman, MD, of the Missouri Orthopaedic Institute's Limb Preservation Center, helped Donna Boggs save her right foot and get back to normal activities after an accident in 2015.

Donna Boggs had just pulled into the driveway in a borrowed late 1980s model Buick Skylark, with her 1-year-old grandson asleep in the backseat. She stepped out to check the mailbox. Then she realized that she hadn’t fully shifted the car into park.

As the car started to roll back toward the road, she scrambled to open the door and climb back inside, but she was knocked down. The left front tire rolled over her right foot and pinned her to the pavement.

Boggs fished the cell phone from her pocket and dialed her daughter and ex-husband, but neither answered. In her panicked state, she didn’t think to call 911. There isn’t much traffic along East Stark Avenue near its intersection with Brown Station Road in northeast Columbia, and Boggs estimated she was stuck for 20 minutes, crying for help.

The man was Russ Mulkey, an employee of Socket Telecom, who was on his way home to eat lunch and let his dog out. When Mulkey drove past Boggs’ driveway, he initially thought Boggs was changing a tire, but something didn’t look right, so he put his truck in reverse and took a second look. He then realized the seriousness of the situation.

“I apologized to her because I knew getting in the car to drive it off of her foot would put more weight on her and hurt even more, but I didn’t know what else to do,” Mulkey said. “She said, ‘Just do it.’”

Afterward, Boggs remained on the ground, although Mulkey said she was most concerned about her grandson. It was a warm September day in 2015. Mulkey put the boy in his air-conditioned truck, called 911 and comforted Boggs until an ambulance arrived.

“The heel of her foot and up the ankle was bleeding pretty badly,” Mulkey said. “I just remember thinking, ‘Gosh, I hope she’s not going to lose that foot.’”

Although she suffered no broken bones, Boggs’ heel pad was nearly ripped off. She had three surgeries over the course of a year, but the wound would not heal and the loss of the cushioning heel pad made it too painful to stay on her feet.

Deeply frustrated and facing the possibility of amputation, she was referred to Jay Bridgeman, MD, of the Missouri Orthopaedic Institute’s Limb Preservation Center.

“What we offered her at the Limb Preservation Center was to use a muscle from her thigh and add that muscle over her wound, which would allow us to put a skin graft there to seal the wound and let it heal,” Bridgeman said. “It also gave us a thick muscle to provide cushion, so it would restore some of the cushion she lost in her injury. That process requires microsurgery, which is what I do. I’m a hand surgeon, but I also do microsurgery.

“It’s a technically difficult surgery, but it’s one we do at the University of Missouri on a weekly basis. We’ve had good success with this type of surgery. It’s not something that’s found at most hospitals.”

The procedure takes 8 to 12 hours. Afterward, patients are hospitalized for close monitoring. Nicotine and caffeine can lead to failure of the surgery, so there are restrictions for patients after surgery. Boggs struggled to do without iced tea and chocolate, but the reward was more than worth it.

“Before Dr. Bridgeman did my surgery, I had no feeling in my foot — none,” Boggs said. “Since he’s done my surgery, I can feel my heel. I can feel when it’s hot and when it’s cold. I can walk no problem. I can actually wear tennis shoes again. It’s all back to normal.

“If it wasn't for Dr. Bridgeman, I probably would have lost my foot. I just love the guy.”