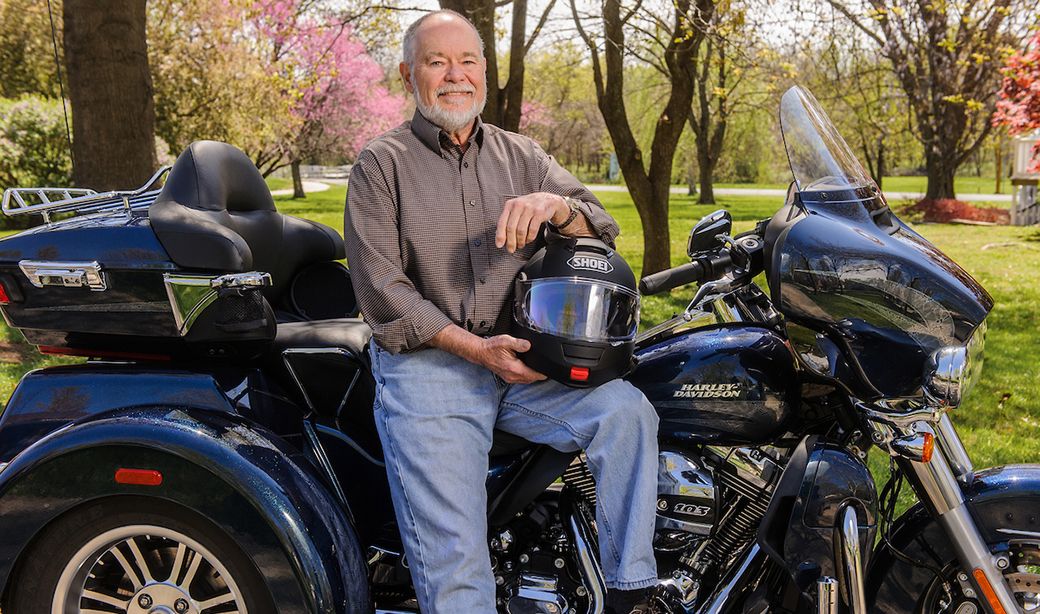 Don Cable, 70, of Sedalia, Missouri, has ridden through all but three of the 48 continental states on a motorcycle. Next summer he plans to cross the final three off his list: North Dakota, Washington and Oregon.

The retired dentist feels fortunate to sit behind handlebars again after a devastating motorcycle wreck in 2015.

“My helmet saved my life,” he said.

Don and a group of seven fellow motorcycle enthusiasts were riding south of Versailles, Missouri, on June 28, when Don hit loose gravel on Highway W and lost control. The bike overturned and threw Don.

Don struck his left side, fracturing eight ribs, his collarbone and parts of his spine. His left lung collapsed and blood pooled in between the wall of his chest and lung. An officer with the Missouri State Highway Patrol told his friends that the accident would have killed him if he were not wearing a helmet. The Staff for Life Helicopter Service airlifted Don to MU Health Care’s Frank L. Mitchell Jr., MD, Trauma Center in Columbia.

“From the minute I got there, everyone spoke highly of Dr. Quick,” said Don’s wife, Ellen Cable. “The guy in the ER said, ‘if anybody can save his life, Dr. Quick can.’”

During his three-week stay at University Hospital, Don underwent a thoracostomy procedure to drain fluid from his chest, a tracheostomy to help him breathe and he was put on a feeding tube.

His road to recovery was marked by several setbacks, including pneumonia and acute respiratory distress syndrome. His weight dropped below 150 pounds.

“Any infection there is out there, it seems he had it,” Ellen said. “I firmly believe that if not for the nurses, doctors and prayers, Don would not be here today.”

After being discharged from University Hospital, Don continued his recovery at Landmark Hospital, a long-term acute care hospital in Columbia, for five weeks, and then Rusk Rehabilitation Hospital, an affiliate of Encompass Health and MU Health Care, for three weeks.

In October, the Cables returned to Columbia for a spinal fusion procedure led by Christina Goldstein, MD, for damaged vertebrae in Don’s neck. He finished physical therapy sessions for his neck in April.

Don replaced his totaled Harley-Davidson — the first motorcycle he wrecked since getting his first bike in 1967 — with a 2016 Harley TriGlide. He plans to work his way up to longer and longer trips until he feels up to traveling to the Pacific Northwest. After all, he still has three states to see.