A Recovery Worth Writing Home About

Expert treatment, family support helps Chance Sommerer get back on his feet 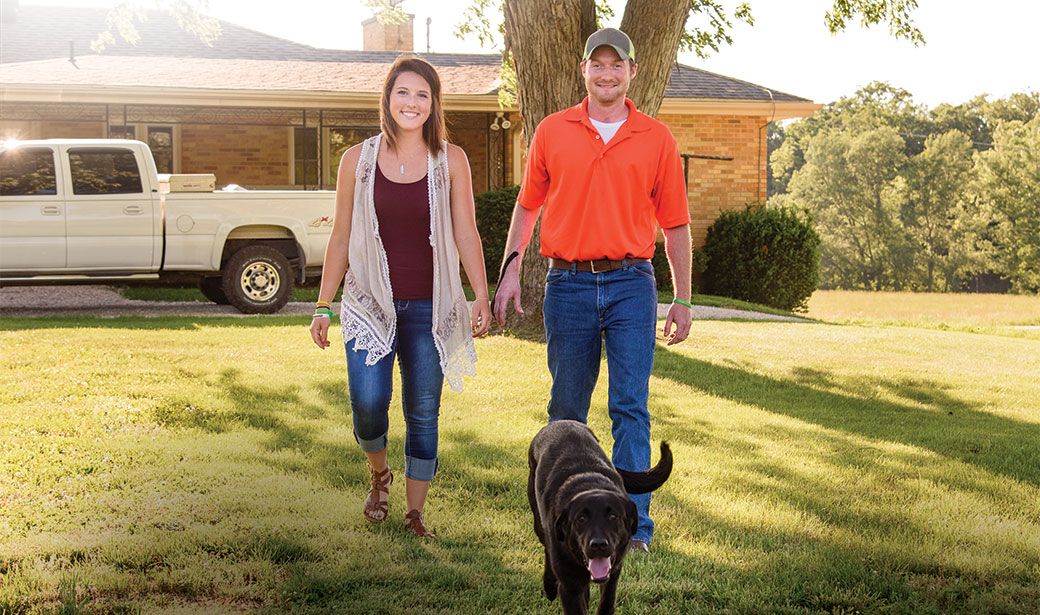 Chance Sommerer is able to enjoy time at home with his wife, Emily, and dog, Moose, after being involved in a serious car accident and enduring a life-threatening complication.

“I got the call about 5:25 p.m. on my way home. A lady called from your phone saying you had been in an accident.”

The future of that person is in the hands of EMTs, doctors, nurses and therapists but also in the hands of family and friends who put their own lives on hold to care for a loved one.

“Unfortunately, because of the acute life-stressors and the acute life change that happens when suffering from trauma, depression, anxiety and post-traumatic stress disorder are very common,” said Brett Crist, MD, an orthopaedic trauma surgeon at MU Health Care. “Usually people have a hard time getting back to work quickly, so people lose income and can become destitute. It also puts a lot of strain on family relationships, so divorce is also not uncommon.

“However, Chance has been able to persevere and has always had an awesome attitude. A lot of it is because he has such great social support from his family. When I went to talk to his family after I did his first surgery, the room was full. It stinks to have to go through what he went through, but he’s going to be much more likely to be successful because he has such great support.”

This is Chance’s story of injury and recovery, and it is best told in the words of his wife — the woman who had been married to him less than a year when she got that fateful phone call. Emily kept a journal in a red spiral notebook for 48 days, noting the emotional swings, the major and mundane milestones and the parade of guests who stopped by every day.

“I came back at 5 a.m. You had your dressing changed. That’s when you started to act different.”

Chance was driving to his Jefferson City home from his job as an engineer at Quaker Windows in Freeburg when, according to a Missouri State Highway Patrol report, he failed to negotiate a curve on Highway 63, overcorrected and struck an oncoming truck head-on. The driver of the other vehicle suffered minor injuries. Chance had broken femurs in both legs, a broken arm, bruised lungs, a broken nose and a concussion.

Still, he was able to tell a woman at the scene who she needed to call from his cell phone. He was taken via Staff for Life helicopter to University Hospital. At 11:30 that night, when his parents and wife were able to see him, Chance was alert and remembered that he and Emily, a fifth-grade teacher at South Elementary in Jefferson City, had planned to come home to a slow-cooked meal.

His first question was, “Em, did you put the ribs in the fridge?”

As sometimes happens in trauma accidents in which long bones are broken, fat embolisms from his femurs leaked out into his blood stream. Usually, those fat globules are filtered through the lungs and heart. But Chance, then 24 years old, had an undiagnosed condition called patent foramen ovale — a hole between the left and right upper chambers of the heart — so nothing stopped the embolisms from travelling to his brain and causing strokes, which led to a frightening change in his behavior.

"You had a look in your eye," Emily wrote. "You tried to pull out your IVs. You kept pushing down your blankets and saying, ‘Come on,’ or pressing your head, saying, ‘Dammit.’ "

For the next week, Chance rarely opened his eyes and could not speak. This was the most difficult point for his family, including Emily, his father Danny and his mother Denise. University Hospital was their new home, but they had plenty of company.

“We had probably at least five people there at all times,” Emily said. “The first Saturday he was in the Surgical Intensive Care Unit, we had the whole entire waiting room filled and the whole hallway. I guarantee you there were 40 to 50 people there, if not more, for a good three to four hours.”

“You have a procedure today to try to find the hole in your heart. I’m absolutely terrified. I need a big hug from you to reassure me.”

Chance was in no position to reassure Emily. Sensing her anxiety, anesthesiology resident Joanna Gould, MD, went out of her way to soothe her.

“She just sat with me, and we talked about our wedding days,” Emily said. “I felt as though she was sitting next to me as a friend, not just a doctor. She knew exactly what to talk about to make me feel better and treated me as family. It meant more than she will ever know.”

Richard Webel, MD, fixed the hole in Chance’s heart. The next day, Crist repaired his legs, which were broken in several places, by making multiple small incisions and setting the bone with plates and screws. Then Crist addressed the broken right arm.

There was no surgery to get Chance’s brain back to normal. That would take time and therapy.

Emily’s journal entries reflected the incremental progress. On Oct. 9, he wiggled his toes on command. The next day, he spoke. The day after, he breathed on his own without a ventilator.

His memory, though, was slow to return.

“Yesterday you said you didn’t remember me,” Emily wrote on Oct. 11. “Then today said the same thing. I told you that I was your wife, and you said, ‘Good.’ ”

On Oct. 18, the day before Chance was released from the hospital and sent to Rusk Rehabilitation Hospital, an affiliate of Encompass Health and MU Health Care, he asked about the accident.

“Your dad explained what happened and how prayer got us all through,” Emily wrote. “You and I then discussed it and looked at pictures. Tears were shed, but I believe it is a step forward.”

“We had pork steaks, ranch potatoes and green bean casserole. It was delicious. Topped off with some sparkling grape juice and wedding cake.”

Nobody plans to spend their first anniversary at a rehab center, but the Sommerers made the best of it. Visitors continued to stop by, and that meant Chance and Emily sometimes entertained guests in the activity room instead of his patient room.

Chance made great progress in physical and occupational therapy, but he was frustrated by the cognitive tests.

“He scared us because he’s a mechanical engineer, and when we got to Rusk, he was having a hard time counting to three,” his father said.

With the help of the Rusk therapists and time for his brain to heal, he came around.

On Nov. 3, he returned home to a support team that had grown by one member — a Labrador retriever puppy named Moose.

Life slowly got back to normal. Emily returned to work. Chance got out of his wheelchair and went back to his job in mid-December.

Chance shows some effects of his accident. He walks with a slight limp, and his right arm is still recovering from an April surgery to repair his radial nerve. He said he occasionally gets tongue-tied. But his outcome could have been so much worse.

“He very well could have died with what happened to him,” Crist said. “There’s about a 50 percent chance of dying when someone has both femurs broken. It just indicates you had a lot of energy going through your body, so you likely have other things going on, like chest or abdomen or head injuries.

“He did have some chest injuries, but he was lucky he didn’t have a real bad head injury before he had the fat embolisms. Now when I see him in clinic, it’s hard to tell he had any problem with his head. His personality seems the same as before he got hurt, according to his family.”

His family is grateful. Accompanying his son on a follow-up visit to University Hospital in February, Chance’s father expressed thanks.

“The people here cared for him, and they also cared for us,” Danny said. “Every time they walked in and every time they walked out of the room, they said, ‘Can I get you all something? Is there something I can do for you?’ We got more than one lecture that we needed to take care of ourselves so we could take care of him. God gave these people an amazing gift to be able to heal people the way they do.”