Rescue on a Rural Road 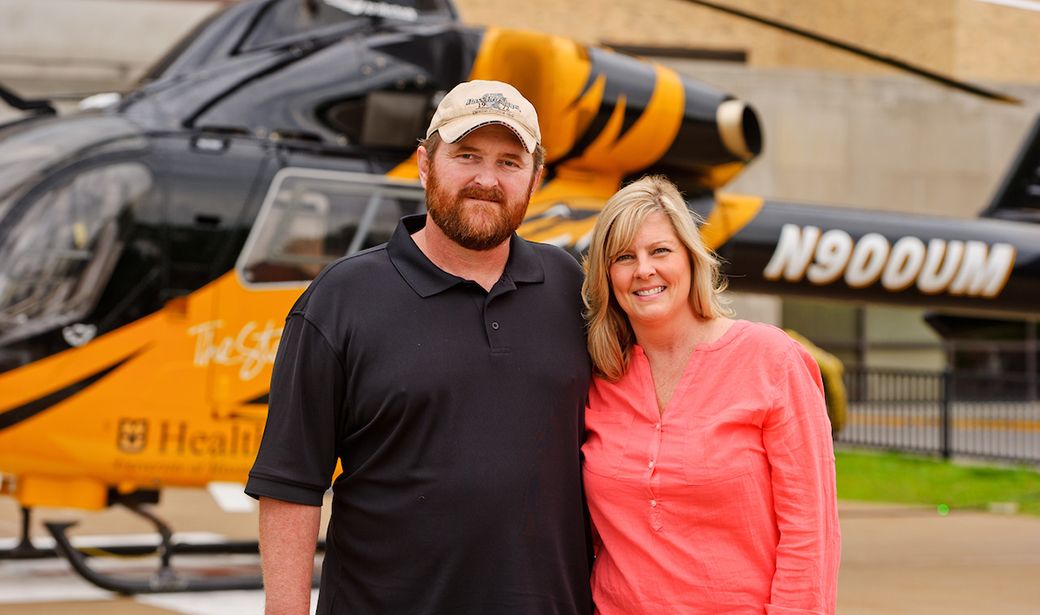 Deer are plentiful in the countryside of Salisbury, Missouri, and one nearly cost Steve Atkinson his life in January 2015.

Beverly Atkinson was driving home with Steve, her husband, and son Garrett, 14, when a deer sprang in front of her car on Highway 5. Before she could react, Beverly’s car hit the deer and the car spun into the two-lane road’s lane of oncoming traffic. A Ford F350 truck broadsided the Atkinson family’s Volkswagen Beetle, striking the front passenger seat where Steve sat.

Local residents stopped to assist the family and called for help. Because his injuries were not as severe as those of his parents, paramedics took Garrett by ambulance to the nearest hospital for treatment of his broken nose. The Staff for Life Helicopter Service airlifted Steve and Beverly to University Hospital’s Frank L. Mitchell Jr., MD, Trauma Center in Columbia. More than 50 miles from the accident site, University Hospital’s trauma center is the nearest Level I trauma center, meaning that the hospital has all the necessary resources to care for the most severely injured patients 24/7.

Beverly was quickly treated and released from University Hospital. Soon she spoke with Steve’s health care team and was anxious to see her husband.

"In the very beginning when I went in to see Steve at the hospital, I didn’t think he was going to make it,” Beverly said. “As a nurse, I assessed him and thought, ‘there’s no way anyone could live through this.’”

Steve’s injuries included facial fractures, skull fractures, a deep wound to his right hip and brain and lung injuries. Surgeons performed a craniectomy procedure to decrease brain swelling and a ventriculostomy procedure, during which they drilled a hole in Steve’s skull to reduce pressure.

“The nurses were amazing at monitoring that pressure and tweaking it just right,” Beverly said. “They were so good at listening to me also. They accommodated me. They would pull my chair up beside Steve’s bed at night and let me tuck myself in and hold his hand. It’s just amazing how they made me feel like they wanted me in that room. That was great. They didn’t have to do that.”

Steve was in University Hospital for more than two weeks but does not remember his stay. On Feb. 9, he was discharged to Rusk Rehabilitation Hospital, an affiliate of Encompass Health and MU Health Care, where he stayed for two weeks and worked with speech, occupational and physical therapists to recover.

Three months after the accident, Steve returned to work as the eastern district commissioner for Chariton County and a beef cattle farmer. Because Steve tires easily, family has pitched in to help with farming chores. Doctors expect that Steve’s energy level will return to normal by a year after the accident and he can return to working full days instead of half days. Steve continues to see trauma surgeon Stephen Barnes, MD, at a clinic for follow-up appointments and wound care for his right hip.

“Never did I think he was going to be like my Steve before the accident,” Beverly said. “Most people either have so many handicaps from that kind of damage or they pass away. So all their interactions and everything they did in the helicopter and at the hospital saved him. I can’t thank them enough. I am so grateful for Dr. Barnes, all the nurses and everyone else who helped Steve.”

Steve is grateful to be home with his family and acknowledges that he had a close call.

“What can you say, other than ‘thanks’ a million times,” Steve said. “I’m really thankful for this place.”