Stylist Promotes Sun Safety to Clients After Her Own Melanoma Diagnosis 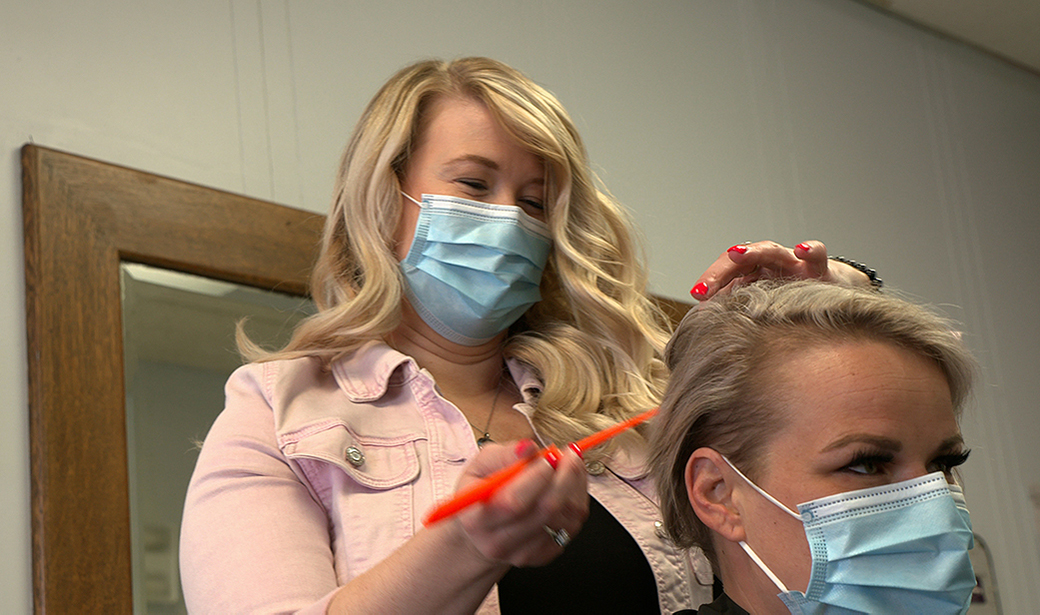 As the owner of Salon Glo in La Plata, Missouri, Rachel Powell has plenty of time to chat with her clients as she styles their hair and helps them look their best. When it comes to skin care advice, Powell isn’t just making small talk.

She has firsthand experience as a skin cancer survivor.

“I always encourage people to use sunscreen all the time, watch for any spots on their body and try not to tan,” Powell said. “I recommend spray tans if they really want color.”

Powell followed her own advice, but her fair skin made her susceptible to developing skin cancer. In 2018, her mother noticed a dark, asymmetrical mole on the back of Powell’s upper left thigh.

Melanomas most commonly appear on the legs of women and the backs of men, but they can show up anywhere, even on the palms of the hands and places never exposed to sunlight. The ABCDEs of melanoma can help you remember what to look for: asymmetry; border irregularity; color that is uneven; diameter larger than a pencil eraser; and evolution in size, shape or color.

“In Rachel's case, her spot was an ugly duckling,” said Emily Smith, MD, a dermatologist at University of Missouri Health Care. “It didn't look like anything else on her body, so that prompted our nurse practitioner to biopsy it.”

Lab tests confirmed it was melanoma.

“She was diagnosed in our clinic, we read the pathology here in our lab, we got her in, coordinated her care and got her treatment very quickly,” Smith said. “We all work in the same building, we’re just hallways apart, so we can walk over and communicate with one another. This is important to ensure we’re all on the same page and the patient is getting the absolute best care.”

Powell’s care began with surgery to remove the tumor and determine if the cancer had spread.

“At the time of surgery, we injected her with two different types of dye,” said surgeon Nicole Nelson, DO. “We use a radiotracer and a blue dye, and we used those to identify which lymph node that part of the skin would normally drain to first. We took that whole lymph node out, and then sent it off to the pathologist to see if there are any tumor cells in that lymph node.”

The dye traveled to three of Powell’s lymph nodes, and one of them had cancer cells. That meant she would need additional treatment. The good news was the cancer had not spread to other organs.

“It used to be very scary to get a diagnosis of metastatic melanoma,” Smith said. “The outcomes weren’t great. The treatment options were limited. Over the last 10 years, we have this new type of therapy called immunotherapy, which has absolutely changed outcomes.”

Immunotherapy helps the immune system identify and attack cancer cells. Powell received immunotherapy infusions twice a month for a year, completing her treatments in September 2019. She has shown no signs of cancer since.

Powell continues to visit MU Health Care for follow-up exams and PET scans every six months and does a full-body self-check once a month.

“She has such a good attitude and has taken everything in stride,” Nelson said. “It’s a scary diagnosis, especially being so young.”

The average age in which a person is diagnosed with melanoma is 65, but Smith and Nelson said they are seeing a trend of younger patients such as Powell, who was diagnosed at age 31.

“Melanoma can be prevented most of the time,” Smith said. “There are genetic reasons why a person might get melanoma without a history of sun exposure, but we know that the major modifiable risk factor for melanoma and skin cancer in general is sun protection. Avoid sun burns, stay out of tanning beds and be as careful as you can when you’re outside.”

Powell now eagerly spreads the word to anyone who will listen.

“I use sunscreen daily, no matter what, whether it’s cloudy or sunny,” she said. “A big misconception is melanoma only happens to older people. It can happen to anybody.”