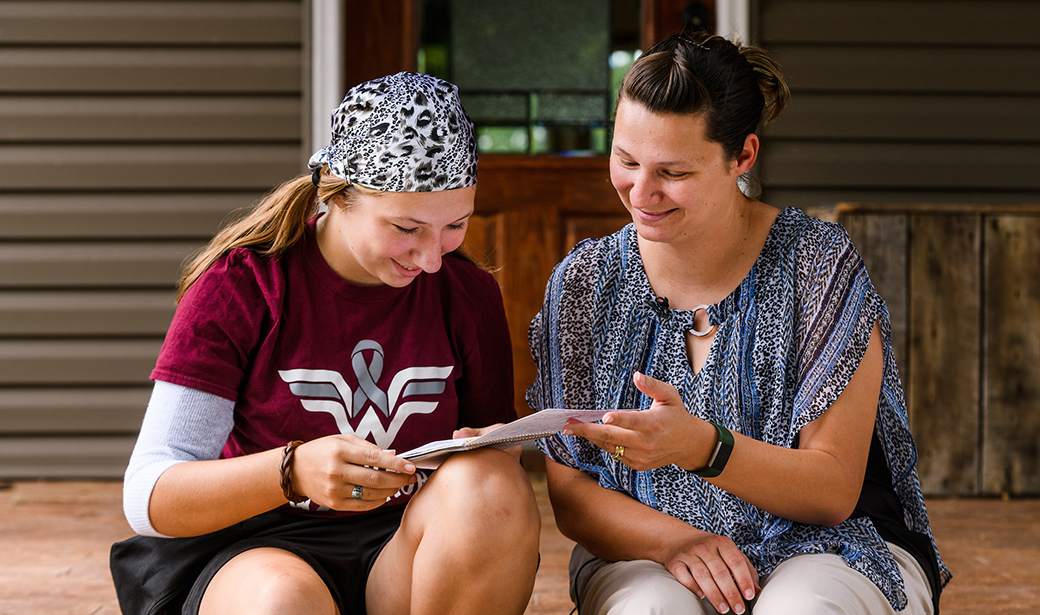 Paige Bax, left, and her mother, Melinda Bax, read the notebook Melinda kept during Paige’s hospitalization. Paige suffered brain hemorrhages caused by an arteriovenous malformation that required multiple surgeries, but she has made a full recovery.

While she sat at her teenage daughter’s bedside in the intensive care unit at MU Health Care’s University Hospital, Melinda Bax passed the hours writing in a notebook.

The rhythmic hiss of a ventilator provided the background noise as Melinda jotted down the terrifying details of the brain hemorrhages that threatened Paige Bax’s life, and she chronicled the long days spent worrying whether her daughter would recover. But since the target audience was a girl who jokingly described her own personality as “not the nicest” and whose favorite activities include “teasing my family,” her mom made sure to mention some lighthearted moments, too.

As she wrote, Melinda imagined the day when the Baxes would return home to St. Elizabeth, Missouri, Paige would read the notebook, learn what she went through and realize how much she means to her parents.

“I’m glad she doesn’t remember a lot of this,” Melinda said about the contents of the notebook, “but I’m also glad that she has this to look back on.”

The story of Paige’s health scare began on March 5, 2021, while she attended an MU Extension Missouri 4-H dance in Eldon. She was on the floor with the other kids doing the chicken dance when she got a severe headache and felt nauseous.

“You could tell all of the sudden she wasn’t looking very good,” Melinda said. “She just came over to me and said, ‘My head hurts so bad.’ When we got outside, she just could hardly function, and she’s not one who’s prone to headaches.”

Melinda called her husband, Rodney, and together they quickly decided to take Paige to the emergency room at Capital Region Medical Center in Jefferson City. There, Paige had a CT scan that revealed a brain hemorrhage suspicious for an arteriovenous malformation (AVM).

An AVM is an abnormal tangle of vessels connecting an artery to a vein in the brain or spine. It allows the high-pressure blood from an artery to flow directly into a vein that isn’t equipped to withstand that much pressure. Over time, because of prolonged exposure to high pressure, AVMs can rupture, causing a brain hemorrhage, which is a type of stroke.

Like many people with an AVM, Paige had no symptoms until it bled, causing her headache and nausea. The staff at Capital Region arranged for Paige to be flown by helicopter to University Hospital, which is the only hospital in central Missouri with a Level 1 Comprehensive Stroke Center designation by the international accreditation body DNV-GL Healthcare.

Paige was admitted to the ICU so she could be monitored until the swelling on her brain decreased, at which point she could safely undergo surgery to remove her AVM. But on her third night in the hospital, that plan had to change. Paige suffered another hemorrhage. She cried out in pain and pushed the nurse’s call button. Her parents woke up and scrambled to her bedside, and nurses and doctors hurried into the room. As Melinda described the scene in her notebook, Paige’s “vitals went bonkers,” her right arm started waving uncontrollably, she had a seizure and lost consciousness.

“When you’re in that situation, you’re helpless,” Melinda said. “You’re relying on your nurses and doctors and the facility to help you, and we had a fabulous staff that night. They knew us, and they were calm and reassuring. They kept Paige as their priority, but they explained things when they could and answered our questions.”

Paige was whisked away for emergency surgery. Siddiq cut a small hole from her skull so he could remove the blood clot and relieve the pressure on her brain. Then he performed an endovascular embolization, accessing the brain through a tube inserted in her groin and sealing off the AVM with a glue-like substance. When the swelling subsided, Siddiq operated again and removed the AVM.

“Because of the severity of hemorrhage and her clinical condition at the time, when we did the first surgery, we were a little bit hesitant about her recovery,” Siddiq said. “Her prognosis was guarded, but we were hopeful because we approached this surgery in such a quick manner and were able to a very quick decompression.”

For a week after Paige suffered her hemorrhage in the hospital, she needed a ventilator to breathe. But even under heavy sedation, she showed signs that her brain was working. She often signaled her parents to hold up the notebook so she could write messages. One day, she heard a wrapper opening in the room and wrote: “Tell Dad not to eat my chocolate.”

Paige passed her first major recovery milestone when she breathed on her own after being taken off the ventilator. She achieved another victory when she passed a swallow test so her feeding tube could be removed. In between, Melinda was relieved to see her daughter’s personality re-emerge.

“We finally realized she was getting back to normal when she started teasing the nurses and joking around and giving everyone a hard time, because she’s a little ornery,” Melinda said.

After three weeks in the hospital, Paige was cleared to go home. She needed follow-up surgeries to address leaking spinal fluid but is now fine physically and mentally. She’s even resumed her favorite hobby, target shooting, which she learned from her father. Siddiq called Paige’s recovery remarkable and said she is not at risk for future hemorrhages.

“She can live her live normally, like any other kid her age,” Siddiq said. “There are no restrictions.”

Just as she had imagined back in the ICU, Melinda gave the notebook to Paige when life got back to normal at home. After reading about her life-threatening illness, all that went into saving her and everyone who was praying for her recovery, Paige finally gave her thoughts on her mother’s literary labor of love.

“Mom, your handwriting,” she joked. “You must have been really stressed out, because you spelled so many words wrong.”

What is a Comprehensive Stroke Center?

MU Health Care is the only health system in mid-Missouri to receive Comprehensive Stroke Center certification from the international accrediting organization DNV GL Healthcare. It is the highest level of certification a stroke program can receive and indicates that we offer the clot-busting intravenous tPA medication and mechanical thrombectomy for acute strokes, as well as the most advanced endovascular and open surgical treatments for aneurysms and AVMs. We meet the following time standards for stroke patient care: