After Cancer Scare, Fulton Man Is Advocate for HPV Vaccinations 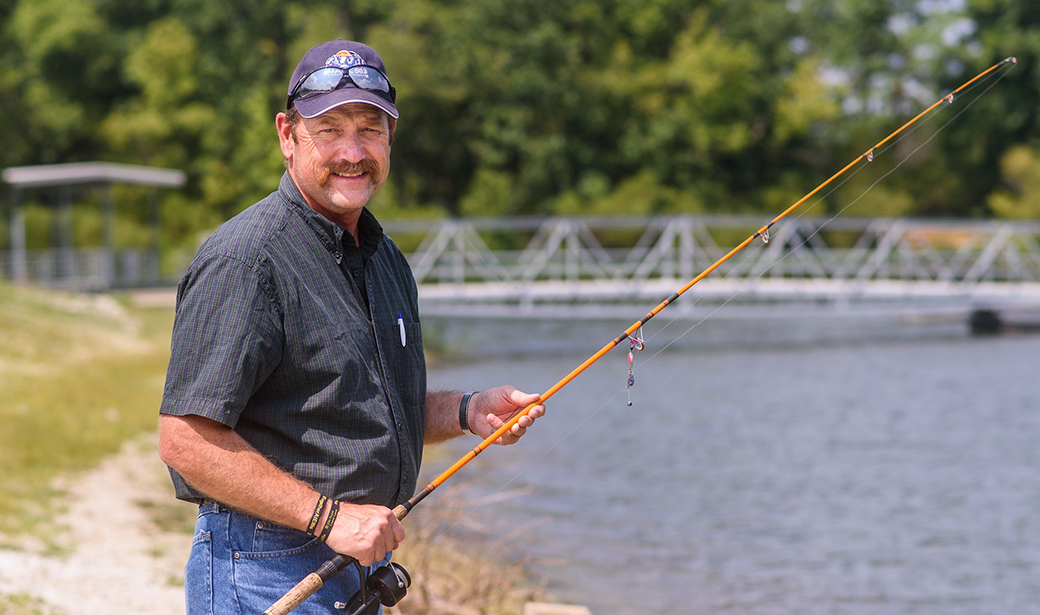 Fulton’s Scott Ward didn’t realize men were in danger of cancers caused by the human papillomavirus until he was diagnosed with throat cancer caused by HPV. After treatment at MU Health Care’s Ellis Fischel Cancer Center, Ward is cancer-free and has resumed his favorite activities, including fishing.

For the last 30 years, Scott Ward has looked forward to traveling and fishing with his buddies. But with a job in the road construction business, there was little time off in the summer for such fun.

The strenuous work left him with back pain, a degenerated disc in his neck and bad knees. At age 54, the Fulton resident found himself facing retirement.

“Before I get too crippled up, I decided it was time to walk away,” Ward said.

To come to terms with early retirement, Ward envisioned making up for all those missed fishing trips. It didn’t turn out the way he imagined. A seemingly insignificant lump on his neck dealt him another health blow: cancer.

Ward was referred to MU Health Care, where he was diagnosed with a type of throat cancer called squamous cell carcinoma of the tonsil.

A stunned Ward didn’t even know he was at risk. He never smoked and rarely drank. That’s when he learned about the different kinds of cancers, including his, caused by the human papillomavirus, HPV.

“Normally, when you think HPV, you think of women — cervical cancer,” he said.

Doll said that up until the early 1980s, smoking and drinking caused the majority of his cancer cases involving the base of the tongue and tonsil, but that’s changing.

“In the last 20 to 25 years, there’s been a marked increased instance of oropharyngeal cancer, but at least 65 percent to 80 or 90 percent are related to the HPV virus,” said Doll.

HPV causes cancer in men and women. There are more than 100 types of HPV spread through sexual contact. For some people, their immune system eradicates the virus, but for others, it turns cancerous — even years after being dormant.

In November 2017, MU Health Care’s Ear Nose and Throat surgery team used the da Vinci robotic system to remove one of Ward’s tonsils. They then removed 22 lymph nodes through a surgical neck dissection. Fourteen of the removed lymph nodes were cancerous.

The da Vinci allowed doctors to perform the complicated, delicate procedure through small incisions. Ward healed faster and had less scarring because of the smaller incisions.

After surgery, Ward had radiation treatment five times a week for seven weeks and three rounds of chemotherapy. He approached his treatment as if it were his new job.

“I had a routine,” he said. “I didn’t come in sweatpants and slippers. I went dressed as if I were going to work.”

Biedermann added that just as Ward’s approach was critical, so too is a doctor’s bedside manner. He said it’s vital that physicians are caring and candid with patients about their cancer diagnosis and treatments.

“There is a lot of unknown or uncertainty, so it’s crucial to give them as much direct information as possible,” Biedermann said. “Chances are, the cancer treatment is difficult with potentially high risks, so I try to make sure patients understand the goal of care.”

Ward not only relied on his doctors for support, but he also leaned on the nurses, a dietician, physical therapist, nurse and patient navigators, radiation therapists and technicians and a social worker. He forged such a strong bond with his care team at Ellis Fischel that he now calls them “my new family.”

“I know other people are going through cancer who don’t have the treatment I received or the support I got from the team,” Ward said. “I’m happy because everything is right there, and most of it’s in one building.”

It’s the kind of journey he tries to spare others from enduring. The HPV vaccine didn’t exist when he was a kid. Now, Ward educates people about the immunization.

“I have been telling all my friends to get their kids vaccinated — even the boys,” he said. “Most people don’t know about the cancer risk to boys.”

The HPV vaccine is given in two doses six months apart. It is recommended for 11- to 12-year-olds to help prevent six types of HPV cancers later in life. Teenagers and young adults up to age 26 can still benefit from the HPV vaccine

Life is finally starting to look the way Ward pictured two years after hanging up his hard hat. He has been able to don his fishing cap to hit the lakes with his buddies. He also has a new perspective.

Learn More About Our Care
Head and Throat Cancer