After Help from BioJoint Team, Paratrooper Hits the Ground Running 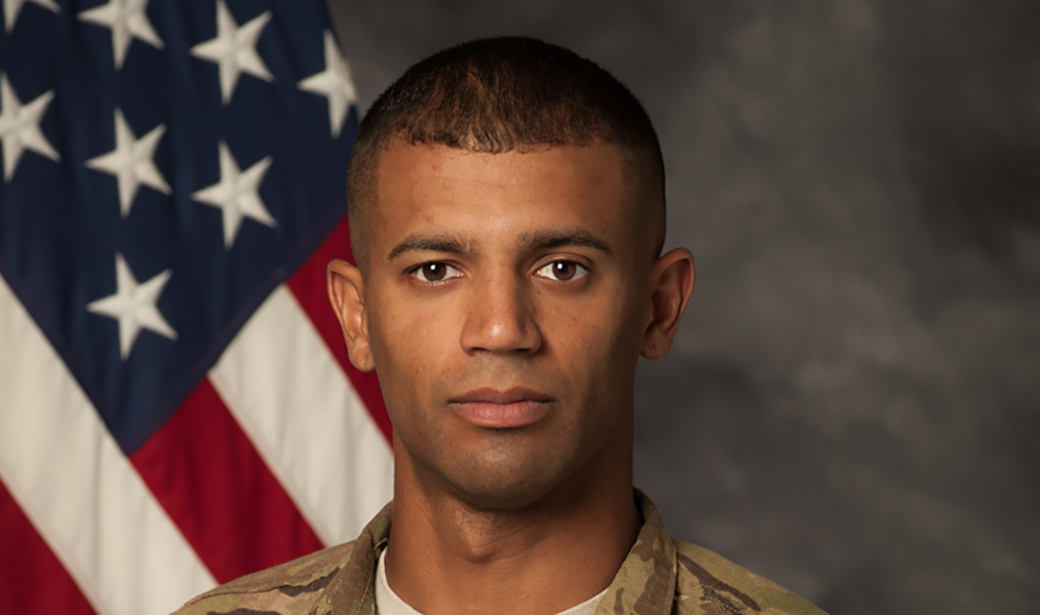 Michael Powell, a staff sergeant in the U.S. Army, injured his knee during a tour of duty in Afghanistan. A year and a half after undergoing a joint restoration procedure at the Mizzou BioJoint® Center, Powell was jumping out of planes again.

Michael Powell, a staff sergeant with the U.S. Army’s 82nd Airborne Division, was hovering over the mountainous terrain near Ghazni, Afghanistan, in 2013 when his right knee and military career took a hit.

Powell rode in the second of two helicopters on a reconnaissance mission. When the first helicopter landed, enemy in the area opened fire before fleeing. The pilots quickly decided to find a safer landing spot. Powell, however, was not aware of that plan and stepped out of his chopper just as it elevated. He dropped about 12 feet to the ground, wrenching his knee.

“I didn’t get the memo we weren’t getting off the helicopter,” he joked.

His fellow soldiers helped him back inside, and they proceeded to the forward operating base, where it was determined that Powell would return to the United States for surgery. He was told a medical discharge was possible.

After surgery and some time off for recovery, Powell was stationed at Fort Leonard Wood, not far from his hometown of Springfield, Missouri. Powell started testing the knee with strenuous work to prove he could return to duty as a paratrooper. He reinjured the knee in early 2015.

This time, he was referred to the Missouri Orthopaedic Institute, where James Stannard, MD, himself a veteran of the Army’s 82nd Airborne, would see if there was a way to fix the knee and preserve Powell’s military career.

Based on his diagnosis of significant articular cartilage loss, his young age and his desire to return to active duty, a biological joint restoration procedure was the option Powell chose to pursue. At the Mizzou BioJoint® Center, donated tissue grafts of cartilage, bone, menisci, tendons and ligaments are used to rebuild joints.

In many ways, soldiers are ideal candidates for these procedures. They are young, active and often suffer traumatic injuries to their knees and ankles that lead to arthritis. The Mizzou BioJoint Center recently received a $1.98 million grant from the U.S. Department of Defense to continue to optimize their biological joint restoration procedures.

Before scheduling surgery, Stannard wanted to make sure Powell understood the importance of adhering to the rehabilitation schedule.

“The most difficult part of the transplant route for young or young-at-heart active people is it requires a full year of really being disciplined and not doing too much or you’ll ruin it,” Stannard said. “The best analogy I’ve come up with is it’s like a plant that comes up from seed. When the plant first springs out of the ground, it’s there, but it’s very fragile. If you hit it with a 100-degree day with no shade, it will kill it, whereas when it has a good root system, it can withstand that. That’s what the cartilage is like.”

Powell had cartilage-and-bone transplant surgery in July 2016. For the next year, he spent way more time behind a desk at Fort Leonard Wood than he would have liked, allowing the knee to heal properly. By the end of 2017, Powell felt like his old self.

Powell was transferred to Fort Bragg, N.C., where he trains the next generation of paratroopers. He’s up before dawn and usually logs 10 to 15 miles of walking and running per day. The activity barely slows down after work, as he and his wife, Madison, have four children under the age of 11, including an infant.

His repaired knee was holding up to the daily grind, but what about the stress of a huge impact? He found out on Feb. 20, 2018, when he stepped into a transport jet and went up for his first training jump after surgery. In a military jump, paratroopers fall at a rate of about two stories per second. The landings are so hard, the soldiers have to execute a roll called a parachute landing fall to disperse the force.

“I was the No. 1 jumper, so the whole time I was staring out the door and I could see the ground and see the sky,” Powell recalled. “Once that green light came on, I jumped with no hesitation. Everything was good until maybe the last 10 seconds in the air. That’s when it hit me that the fun was over and the ground was coming.

“I reverted back to not being nervous and just performed as I was trained. I hit the ground with no issues. Got my chute off, got my rig off and ran about 600 meters with a 35-pound pack on my back to the turning point. No leg pain at all.”

Soon, news of the jump, in the form of a thank-you letter, traveled from North Carolina to Missouri. A chapter that began with an ill-fated leap from a helicopter closed with a well-executed jump from an airplane. Powell was back to being a full-fledged soldier again.

“For the surgery to hold up to that, it’s the ultimate test,” said James Cook, DVM, PhD, the director of the Mizzou BioJoint Center. “For him to send a note saying he did that without pain, you can’t give us a better reward. That’s better than a Nobel Prize to me.

“It’s so worth all the work and the effort, because we got him back to doing what he loves to do. And with him, it’s extra special, because he’s doing it for our country.”

Learn More About Our Care
Request an Appointment