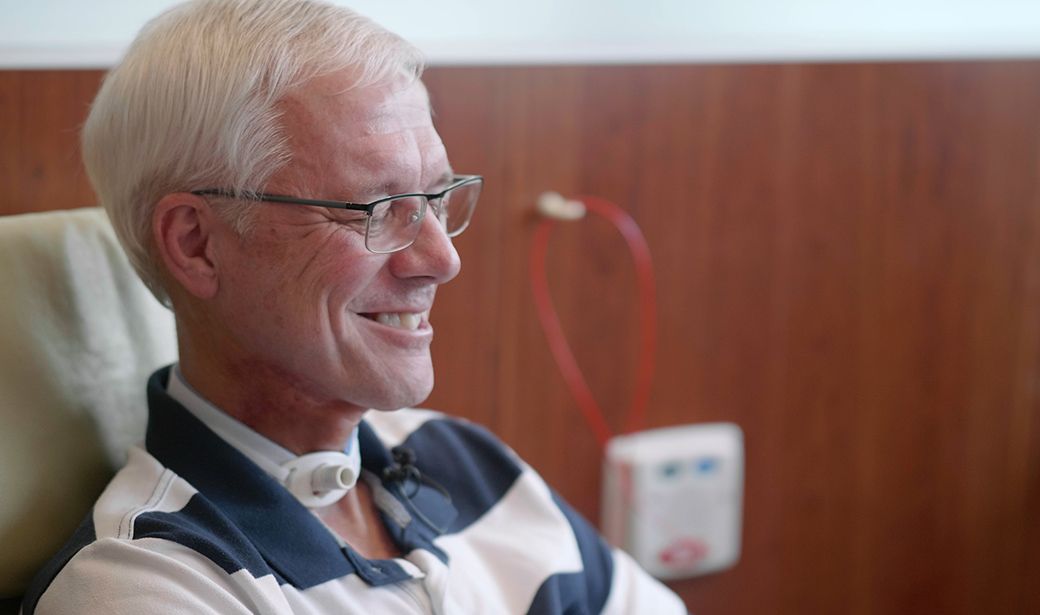 Tery Donelson is determined to keep living his life the only way he knows how. As a 26-year military veteran named mid-Missouri’s “Citizen of the Year” in 2017 by the Military Officers Association of America, Donelson’s work ethic is as relentless as the cancer that has attacked his body for nearly seven years.

“I still go to work every day, and I’m up pretty late,” said Donelson, who served as an airman and officer in the U.S. Air Force.

He’s remained focused on his job at Columbia College working on partnerships with the military and community colleges despite his health problems.

“There was a lump on my neck,” Donelson said. “But I didn’t think it was too bad because that type of cancer had an 85% cure rate.”

Since the diagnosis of throat cancer, Donelson’s seemingly curable cancer has refused to surrender. He endured 35 radiation treatments, eight chemotherapy treatments and a neck surgery during his first bout with the disease. It came back just 18 months later.

“I had two more surgeries, 33 radiation treatments and eight more chemotherapy treatments over the next four years,” Donelson said.

The grueling cancer fight has left Donelson without the ability to speak — he uses a special app on a tablet to communicate. His food comes through a feeding tube. But despite all that he’s lost, Donelson continues to work full-time, missing just seven weeks in 2016 for treatment in Texas and another four weeks in 2018 to recover from surgery.

“I pretty much remain in a state of denial,” he said. “I really don’t think about having the cancer. I just go day to day. There’s no point in worrying about it.”

After the third surgery in 2018, doctors told Donelson they likely would not be able to operate on him again if the cancer returned, because it would risk further damaging the remaining healthy tissue in his throat. But Donelson’s stubborn nemesis returned as stage 4 throat cancer just months later. Statistics show the life expectancy for this type of recurring cancer ranges from 10 to 13 months.

“At that point, the alternatives were not good,” Donelson said.

But this time, the team of doctors at Ellis Fischel Cancer Center who met to consider treatment options devised a plan to use precision medicine to fight Tery’s cancer by helping his body find and fight cancer cells.

“When I looked at Tery, I saw someone who is fit, driven and has a great quality of life,” said MU Health Care medical oncologist Tolga Tuncer, MD. “We chose to go with immunotherapy without any chemotherapy. We prescribed a drug called Prembrolizumab to be given every three weeks. It tells the cancer-fighting T cells that there is a stealthy enemy to seek and destroy and reminds the immune system to get back into action.”

Donelson started Prembrolizumab in November 2018. After a dozen treatments, scans showed the cancer had shrunk by nearly 25%. A recent scan showed his cancer had stabilized.

“In this type of recurrent cancer, our main objective is to achieve stability rather than a complete response,” Tuncer said. “So far, he’s doing excellent."

The mystery with immunotherapy is that some patients don’t respond, but there is also an unforeseeable pattern of those who do respond and have long-lasting responses. It’s a mystery MU Health Care is actively trying to solve with the precision medicine initiatives and research taking place through the NextGen Precision Health initiative.

“What we are trying to understand is why a portion of immunotherapy patients, like Tery, do so well and have durable responses that can last for months to years in a few cases,” Tuncer said.

Compared to the traditional chemotherapy and radiation treatments, Donelson said immunotherapy is easy. Fatigue is his only complaint.

The immunotherapy has provided hope that Donelson’s aggressive enemy may finally be held in check.

“I am doing well with the immunotherapy,” Donelson said. “It’s a great option, and it has really worked for me. I don’t believe I would still be here without it.”