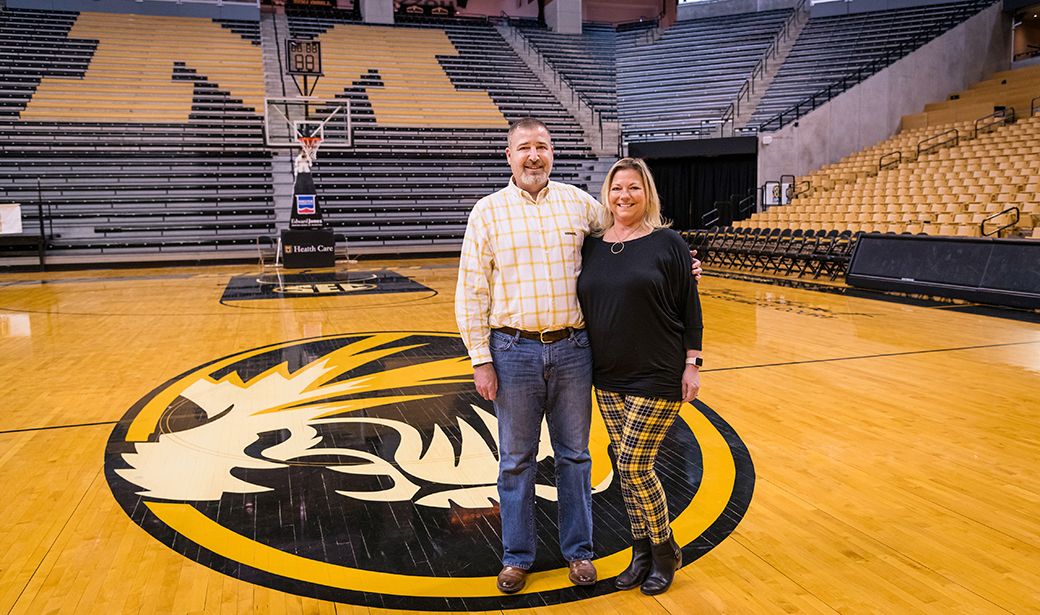 Brian Montgomery was scanning Facebook in 2014 when he came across a post that said his beloved Missouri Tigers didn’t belong in the Southeastern Conference. He was limbering his thumbs for a rebuttal when he noticed a woman named Tara Lambert had beaten him to it. Her reply outlined the reasons the SEC was better off with Missouri in it.

He sent her a message, and they learned more about each other during marathon phone conversations. Both graduated from Hannibal High School in 1991, although they didn’t know each other at the time. She went to college and returned to Hannibal as a teacher. He enlisted in the Air Force and later settled in St. Louis.

“We fell in love over discussing sports and Mizzou,” said Tara, who began attending MU football games with her father as a young girl and once dreamed of joining the Golden Girls dance team.

Six months after that fateful Facebook post, Brian and Tara were engaged. They married and settled in Hannibal. She taught speech at Veterans Elementary School, and he worked as a fulfillment coordinator at Lowe’s Home Improvement store. They scheduled their weeks around watching the Tigers play on television. They took those games seriously. If Missouri was losing, Tara would change clothes at halftime to reverse the luck.

The tranquility of their new life together was jolted on April 11, 2017. Tara had suffered terrible headaches the previous two days, but the pain subsided and she had a normal day at school. When she pulled into her driveway, she started to feel lightheaded. Once inside, she collapsed.

Brian was supposed to work until 5 p.m. that day, but his schedule changed at the last minute and he got off at 4:30 — a stroke of luck that likely saved his wife’s life. When he got home, he found her on the floor. She was conscious at first, but then her eyes rolled back in her head. As Brian called 911, he noticed the left side of Tara’s face drooping, “like a candle melting.”

“The next thing I know, they say, ‘We’ve got to go now,’ ” Brian recalled. “All of the sudden, they take my wife in the ambulance, and I’m just standing there, still trying to process what happened. I didn’t know what to do. My life is my wife.”

Tara was airlifted to MU Health Care’s University Hospital, mid-Missouri’s only comprehensive stroke center. It has a stroke team available around the clock to guarantee patients are seen, scanned, diagnosed and treated within 90 minutes of arrival. She was diagnosed with a subarachnoid hemorrhage, a type of stroke. An aneurysm — a balloon-like bulge in a blood vessel — in her brain had ruptured. That caused blood to flow into the space between her brain and the surrounding membrane. About one-third of the patients with this condition make a full recovery, one-third live with significant disabilities and one-third do not survive.

“Once you have an aneurysm that’s ruptured, there are multiple things you are at risk for,” said MU Health Care’s Adnan I. Qureshi, MD, a stroke and interventional neurologist. “It could rupture again. You’re at risk for brain swelling and increased pressure in the brain. It is really a medical emergency. There’s no room for delay. Every minute you’re not seeking care is taking away from the chances of recovering.”

The MU Health Care neurosurgery team went to work, drilling a hole in Tara’s skull to drain the blood and relieve the pressure on the brain. Next, the team used a procedure called endovascular coiling to seal the aneurysm. A catheter was threaded from the femoral artery in the groin to the location of her injury, and tiny metal fibers were deposited in the aneurysm. Once inside, the fibers coiled up. The coils attracted blood clots, which sealed off the aneurysm to guard against another rupture.

The procedures worked, but it was several stressful weeks before anyone knew if Tara would fully recover. The couple had planned to visit Columbia on April 16, 2017, for the Black-and-Gold Game — the final spring football scrimmage. Instead of enjoying a spring day at Memorial Stadium, they were across the street at University Hospital. Brian turned on the game in Tara’s room.

“Tara was really unresponsive, but I would give her play-by-play: ‘OK, Drew Lock just made this pass,’ ” he recalled. “I did the entire play-by-play of the game.”

Tara spent 3½ weeks in the neurological intensive care unit and six weeks total at University Hospital. She has few memories of the experience, which Qureshi said is typical. When she returned home, she worked throughout the summer to relearn how to drive and even do basic tasks such as applying makeup. By August 2017, she was cleared to resume teaching.

The stroke still affects her depth perception and causes her to struggle with short-term memory recall. To her students, she compares herself to Dory, the fish with memory loss in the Disney movie “Finding Nemo.”

“It’s made me better at my job, because I have to make notes,” Tara said. “They’re on my phone and in my desk and on a Post-It. I think it’s actually made me more organized.”

The couple has resumed their favorite pastime, watching the Tigers in the Mizzou-themed room that Brian is always enhancing with new decorations he finds at his local Goodwill store.

“During my wife’s recovery and since then, the games, those are three hours we don’t have to worry about a medical bill or after-effects,” he said. “It’s three hours of just enjoyment.”

Now, they don’t take the losses so hard. Brian said he has tried to adopt the positivity of MU Health Care’s “Yes Makes it Possible” slogan that he frequently saw and heard during his wife’s hospital stay.

“When I was going through everything with my wife, I was alone,” he said. “There would be days when I worked all day, drove two hours to Columbia, spent time with my wife, drove back home, and repeated that cycle over and over again.

“The power of yes. Yes, you can do it. Yes, you will find a way. Yes changes everything. Your wife will recover. There is hope. I’ve seen things that I wouldn’t wish on my worst enemies, but University Hospital, the power of yes, it saved my wife’s life.”