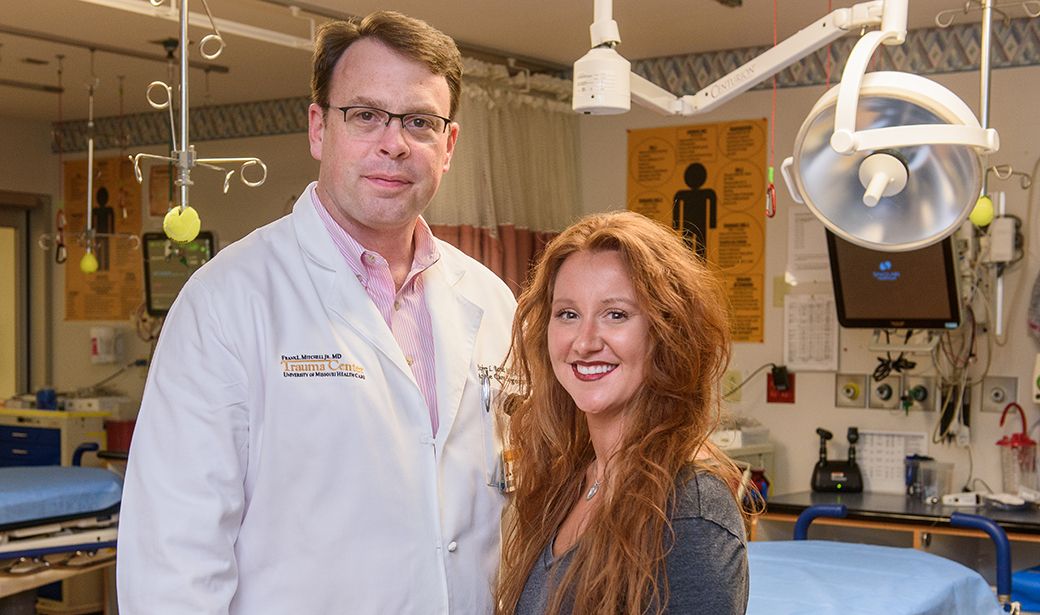 Spending countless hours on the water was nothing new for 31-year-old Ashley Ames. She grew up in the river town of Keokuk, Iowa, and the water was a part of her. But in August 2016, the water she grew to love nearly took her life.

Ames was on a vacation at the Lake of the Ozarks and suffered life-threatening injuries in a jet ski accident.

"I thought I was paralyzed — I couldn't move my legs, I couldn't talk," Ames said. "I remember going to the dock on the jet ski. It felt like my body was crushing with every wave. I woke up two days later in the ICU."

While waiting for the ambulance to take her from the scene, Ames lost so much blood she needed a blood transfusion at Lake Regional Hospital in Osage Beach. She was airlifted to the Frank L. Mitchell Jr., MD, Trauma Center at University of Missouri Health Care — mid-Missouri's only Level I trauma center. While in the air, Ames required another blood transfusion. At the trauma center, she immediately underwent "damage-control surgery" — a term used to describe performing the necessary surgical interventions to ensure she was strong enough for the surgeries that would come next.

Ames suffered a massive pressure injury to her pelvic floor and abdomen. She remembers waking up and immediately asking for her two children. The reassurance and support she received from trauma surgeon Stephen Barnes, MD, was crucial, she said.

"I didn't want my girls to be afraid of seeing me like that, all the lines, poles, medicine, the hospital gown. I didn't want them to be scared." Ames said. "Dr. Barnes came into my room, pulled up a chair and said that my kids should come see me — that they needed to. He stopped by every day after that. I can't recall a day he didn't come to see me."

In the care of MU Health Care physicians, Ames received two major pelvic and abdominal surgeries and two smaller procedures, while keeping Barnes' "less is more" surgical approach in mind. Her care team believed it was essential to allow time for her body to build itself up before jumping into the next procedure, something Ames initially struggled to accept.

In May 2017, Barnes and his team were instrumental in ensuring she be accepted as a patient at the Mayo Clinic in Rochester, Minnesota, for a bowel reconstruction surgery. Barnes also connected Ames with Raymond Foster, MD, at MU Women’s and Children’s Hospital. Foster implanted a nerve stimulator to address her bladder injury. She continues to visit Foster and nurse practitioner Debra Ritchie for follow-up care.

"Through all of this, I've learned it's not about being patient, it's about trust and trusting the judgment of your doctors," Ames said. "If it wasn't for Dr. Barnes' background and his experience, I wouldn't be here today."

Inspired by Barnes and his team, Ames decided to make a career change.

She is currently studying nursing at John Wood Community College in Quincy, Illinois. In August 2018, she started at Quincy Medical Group as a phlebotomist and is now a lab assistant. She hopes to work in a Level 1 trauma center as a trauma/ostomy nurse with a long-term goal of becoming a flight nurse. She also earned certification as an instructor for the “Stop the Bleed” program that teaches the public how to help people with traumatic injuries before medical professionals arrive on the scene.

“I want nothing more than to take my experience and use what I went through to make an impact on other lives,” Ames said. “To be able to look a patient in the eyes and say, ‘I have been in your shoes, I understand,’ will not only be rewarding to me as a nurse but beneficial to the patients healing process, as well.

“Giving back and having other patients in the future receive the care that I received from the MU Health Care staff is my ultimate career goal. I want to make a difference.”

Ames still visits the staff members who saved her life. They smile when she steps on the floor, throwing their arms around her and noting how far she's come. They greet her family with the same excitement, shouting, "Dad!" when Ames’ father joins her on visits.

With every struggle she encounters, she turns to a framed photo of her with Barnes. It hangs in her living room, displaying a message from him: “Great patients receive great outcomes.”

Ames credits Barnes and his staff for their expertise and care.

"As a surgeon and a doctor, he has a gift," Ames said. "My life was literally in his hands, and thanks to him both of my children have a mother. That's the most important thing to me.

“Not only am I thankful for my care team, but I want to express how thankful I am for their families at home, as well. Thank you for supporting your family members to work around the clock to ensure that lives are saved. Because of them, I was given a second chance at life. It takes a tribe to have a family member that works in health care. Their families may not be present to the patients, but their support is tremendous.”