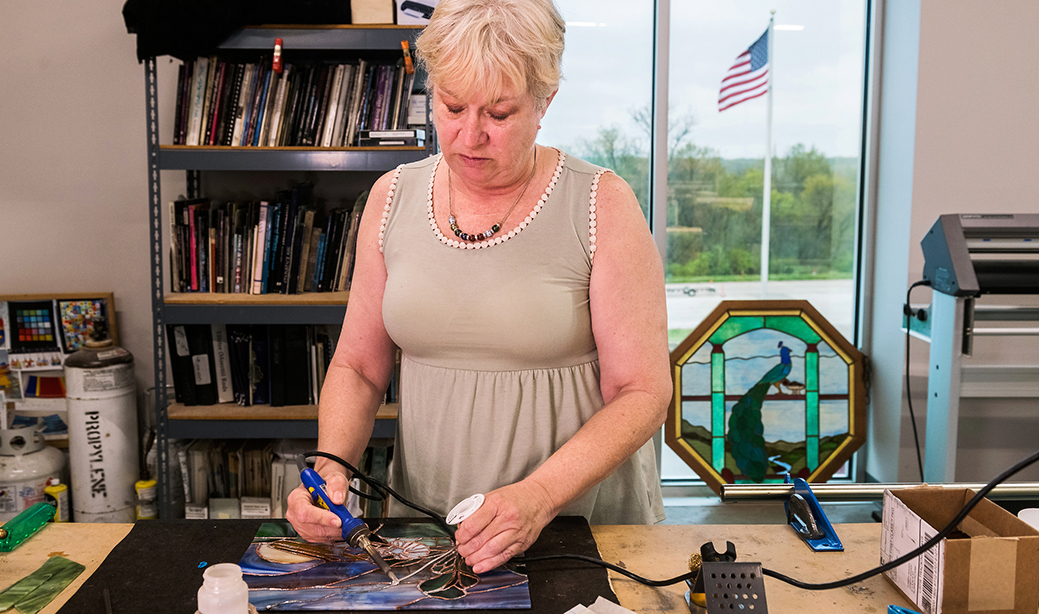 As she crisscrossed northern Missouri selling credit card processing equipment to small business owners, Teresa Woody developed some tricks to stay alert at the wheel. She would spritz breath spray on the underside of her tongue or yank a handful of her hair. But when she couldn’t keep her eyes open any longer, she would pull over, lock her doors and recline her seat.

Once, she awoke to a police officer knocking on her window.

“I said I was getting too tired to drive and I needed a cat nap real quick,” she recalled. “He said, ‘Well, this isn't a great place to do it.’”

Woody had obstructive sleep apnea, which disturbed her sleep up to 64 times per hour and wreaked havoc on her professional and personal life. She retired from the Navy — her second branch of military service after a previous stint in the Air Force — because power outages at sea would interrupt her CPAP machine. She had to quit her sales job because it wasn’t safe to sleep in her car. She even gave up her hobby of making stained glass art because she didn’t have the energy.

“Think about your worst day when you were just so exhausted and you couldn't function,” said Woody, a resident of the tiny north-central Missouri town of Sumner. “You're like that every day.”

Obstructive sleep apnea is a common condition in which the airway narrows or closes during sleep, causing breathing interruptions. Sleep apnea causes loud snoring, but it can also lead to more serious symptoms like extreme fatigue, high-blood pressure, heart problems and stroke.

Woody was diagnosed with sleep apnea in 2005 and was prescribed a CPAP machine, which keeps the airway open by pushing pressurized air through a mask. Unfortunately for Woody, she also had a disease called pulmonary sarcoidosis that weakened her lungs. Over time, her lungs couldn’t handle the pressurized air from the CPAP, so she put the machine away and resigned herself to the idea she would just have to live with the limitations of untreated sleep apnea.

But in 2019, she regained some hope when she learned about a potential solution: an implantable device called Inspire. The device is for adults who experience 15 to 65 sleep interruptions per hour, are not excessively overweight and can’t tolerate CPAP.

“A large part of sleep apnea is a lack of muscle tone in the throat and tongue region that causes that collapse to occur,” said David Chang, MD, an ear, nose and throat surgeon at MU Health Care. “Inspire is a new way of treating that aspect of sleep apnea by adding that tone back to a sleeping person’s tongue to get it out of the way.”

It is a matchbox-sized generator unit that is implanted just below the collar bone. It has a cabled sensor that is placed between the ribs next to the lung, and another cable connected to electrodes that are placed around a nerve to the tongue called the hypoglossal nerve. When a person takes a breath, the sensor around the lung detects this and sends that information to the generator. The device then sends a pulse to the electrodes around the hypoglossal nerve, which causes the tongue to push forward to keep the airway clear.

Woody told her primary care doctor she was interested in Inspire, and she was referred to Chang, who performed the outpatient procedure in September 2020.

After the standard one-month waiting period to allow her body to heal after surgery, Woody began using the device. Her husband, who had previously reported that her snores could “rattle the windows and shake the walls,” told her that her snoring stopped. Woody said after about a month of using the device and working with the Sleep Disorders Center to find the precise settings that worked best for her, she was finally able to sleep all the way through the night.

At a follow-up sleep study three months after surgery, Woody had only two sleep disturbances in an hour, below the minimum of five per hour for a sleep apnea diagnosis. She no longer schedules her days around an afternoon nap and doesn’t limit herself to short drives at certain times of day. She now has the energy to keep up with her nine grandchildren and to make stained glass art.

“I had a 10-year break where I didn't make a single solitary piece of stained glass,” she said. “I just didn't have the energy, didn't have the drive. After my Inspire, I started getting back into it, and now I'm teaching other people the thing that I love to do and giving away lots of gifts.”

If you or a loved one might have obstructive sleep apnea, ask your primary care provider about a referral to MU Health Care’s Sleep Disorders Clinic.