Arthritis is the roughening and destruction of the cartilage that lines the ball and socket. These rough surfaces generate friction and inflammation, causing pain and stiffness.

How do you diagnose arthritis or degeneration of the hip joint?

In many cases, a diagnosis can be made by X-ray studies and a physical examination. Damage to the hip creates a narrowing of the space between the ball and socket. Eventually, the hip can lose so much cartilage that bone touches bone, which can be very painful.

Early arthritis of the hip may not show up on an X-ray. In these cases, other studies, such MRI or CT scans, or an operation called hip arthroscopy, can help diagnose arthritis.

Another word for an X-ray, which shows a silhouette of the skeleton. Although helpful for seeing bone, X-rays do not show muscles, tendons, and ligaments. An X-ray is usually the first imaging study of the hip joint when arthritis is suspected.

Also called a CAT scan. This is a computer-driven study that shows the three-dimension-al bone anatomy of the hip in greater detail than an X-ray, which is two dimensional. With contrast dye, CT scans can even show soft-tissue structure.

A specialized imaging study that can diagnose subtle infections in the joints, especially after the hip has been replaced with prosthetic components 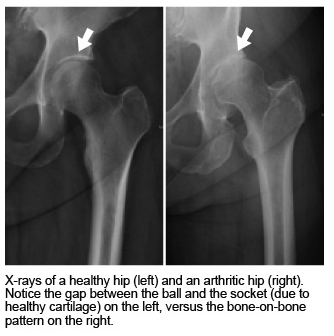 In this study, a radioisotope is injected into the body, with the goal of detecting infection, fracture, or related inflammatory conditions of bone.

Where does one feel the pain of an arthritic hip?

Typically, pain from an arthritic hip will be felt in front of the thigh, to the buttock, or to the outside of the thigh. Pain may also travel to the knee due to overlapping nerves in the hip and knee joints. The pain and stiffness can usually be reproduced by rotating the leg. A painful hip can feel like a pulled groin muscle, or like a toothache in the groin.

Most people never develop hip arthritis, no matter their age. That said, everything in the body wears down with age, and hip cartilage is no exception. Those who need hip replacement surgery generally have a faster progression of hip arthritis because of injury, underlying inflammatory problems, genetic predisposition to arthritis, or a congenital abnormality of the hip joint.

What keeps the hip ball from popping out of the socket? 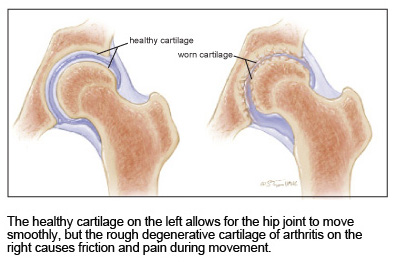 Muscles, tendons, and ligaments hold the ball in the socket, preventing it from slipping or dislocating. Hip dislocation, usually associated with severe physical trauma, is a serious condition requiring immediate medical treatment.

Rarely, the hip joint is predisposed to dislocation and premature arthritis due to a congenital deformity. Newborns are now routinely checked to make sure their hip joints are properly formed.

What is a degenerative hip joint?

A hip joint is referred to as degenerative when the cartilage is damaged due to injury or a disease process, such as osteoarthritis or rheumatoid arthritis.

How does the hip joint get lubricated?

The hip joint is sealed in a capsule. This capsule is a tough tissue envelope surrounding the hip joint, much like the rubber seal surrounding a steering or suspension joint in a car. Cells inside the hip capsule secrete synovial fluid, which is a natural lubricant. In a healthy hip joint, there is always a small amount of this synovial fluid. The fluid serves as biological grease, and lubricates the joint.

Can hip pain be coming from other places?

Yes. What people think of as hip pain can come from other sources, like poor circulation to the leg, an arthritic back, an arthritic knee, painful sacroiliac joints, and other abdominal or pelvic problems. In other words, the problem may be elsewhere, but the patient may sense pain in the hip.

In older patients, hip pain can reflect more than one problem. For example, hip arthritis and back arthritis can occur together. In such patients, hip replacement surgery may help one source of pain, but other areas may also need treatment later.