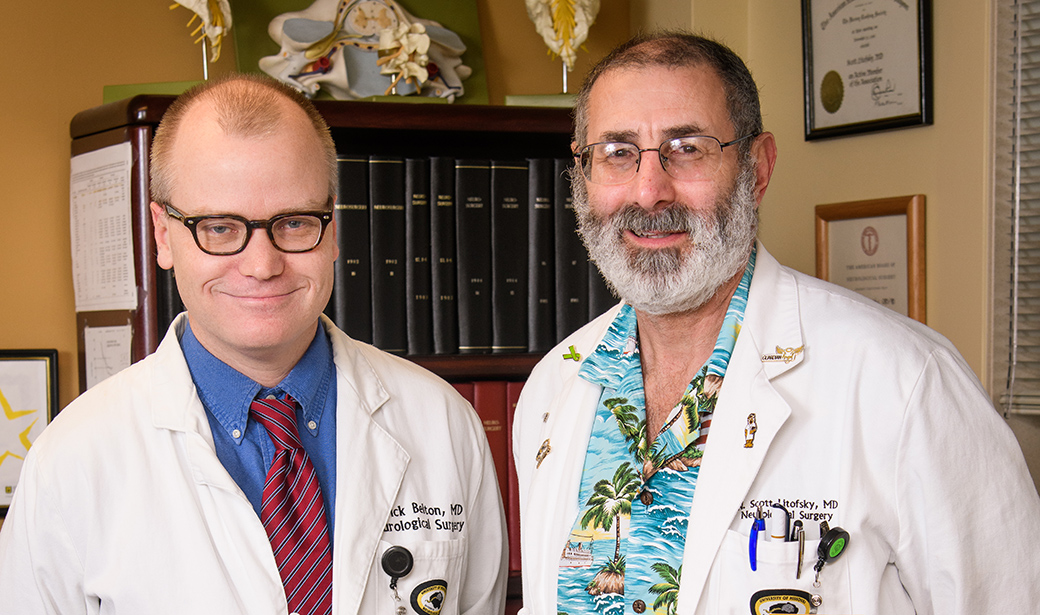 Patrick Belton was living the upwardly mobile professional dream. He parlayed an Ivy League education into a job on Wall Street. For 14 years, he analyzed market risk, traded stocks and managed hedge funds. The tasks suited a man with a mind for math who could see patterns in complex statistics.

Belton traveled on business for weeks at a time in Latin America and Asia. He climbed the corporate ladder. Then he realized his head was in finance but his heart wasn’t.

“Initially, it was very appealing,” Belton said. “Gradually, it became less spiritually rewarding. I thought, ‘What else could I do?’ ”

That question led him, at age 36, to walk away from his job as the chief operating officer of a hedge fund and enroll in medical school. After earning his MD, he came to University of Missouri Health Care to serve the seven-year residency required to become a licensed neurosurgeon.

Belton continues to ask important questions. One of his questions led to a change that could help neurosurgery patients avoid serious infections.

Belton, who is now a fourth-year resident, wondered whether patients who needed surgery for brain or spine trauma were being treated with antibiotics unnecessarily. When patients were tested before surgery, the presence of asymptomatic bacteriuria — bacteria in the urine without symptoms of an infection — forced the surgeon to decide whether to treat the condition with antibiotics to guard against a surgical site infection.

“It was always a discussion of, ‘Do we treat these patients and what do we treat them with?’ ” Belton said. “I felt like there could be more context to the conversation. If we had more data and better analyzed it, we could have a more informed discussion.”

The problem was nobody had studied whether bacteriuria actually caused wound infections in neurosurgery patients. The decision to use antibiotics carried its own risk. Because antibiotics kill the body’s good bacteria as well as the bad, patients who receive antibiotics are susceptible to an infection known as Clostridium difficile (C. diff ). It causes diarrhea that can sometimes be life-threatening, particularly in older patients.

“Sometimes decision-making is not based on scientific evidence as much as it is based on, ‘That’s the way I was taught how to do it,’ ” said MU Health Care Chief of Neurological Surgery N. Scott Litofsky, MD. “Those practices need to be questioned. Young people tend to be a little better sometimes at asking questions. They want to know why. If we don’t have good answers, then maybe we need to go back and decide if we’re really doing it the best way.

“That’s how Patrick got on to this particular topic. He wanted to know why we were treating these people and does it make a difference.”

Belton knew the problem, but he wasn’t sure how to solve it. Then he attended a presentation by Abu Mosa, PhD, director of research informatics at the MU School of Medicine. Mosa described a new computer program available to MU researchers called i2b2 — short for Informatics for Integrating Biology and Bedside. It would allow them to analyze data from the medical records of MU Health Care patients, whose identities remain anonymous.

At a private hospital, Belton’s research project would have been an impractical exercise requiring checking individual medical records. But at an academic health system with access to thousands of records through i2b2, he had the tools he needed. His familiarity with complicated math and statistical analysis from his previous career helped him solve the problems that arose.

Belton looked at the cases of 3,563 neurosurgical trauma patients over an eight-year period dating to 2009. Of the surgical patients who had asymptomatic bacteriuria, about half had been treated with antibiotics. In those patients, he found that antibiotics did not reduce the risk of surgical site infections compared to the untreated group but did increase the rate of C. diff.

In other words, it did more harm than good to treat the patients with antibiotics.

Belton completed the project in one year, and in October 2018, it was published in Neurosurgery, the official journal of the College of Neurological Surgeons. Litofsky said Belton’s research convinced him to not give antibiotics to patients with asymptomatic bacteriuria, and it could well convince neurosurgeons elsewhere to do the same.

Belton found the spiritually rewarding answer to the question he asked himself during his Wall Street days. He’s learning complex skills from seasoned surgeons, and he’s helping provide better care to patients. It’s just one example of how an academic health system such as MU Health Care can provide the best of two worlds.

“Dr. Litofsky has been doing neurosurgery since the 1980s and has been an innovator in the field,” Belton said. “He has a wealth of experience from that and a wealth of knowledge. That’s a resource we have here. But, also, it’s a research institution. In order to advance the field, you have to develop questions and figure out how you’re going to answer those questions, think about how you might do things differently. Sometimes trainees are in a good position to do that. So you have those things married together — the experience and also the potential to innovate.”