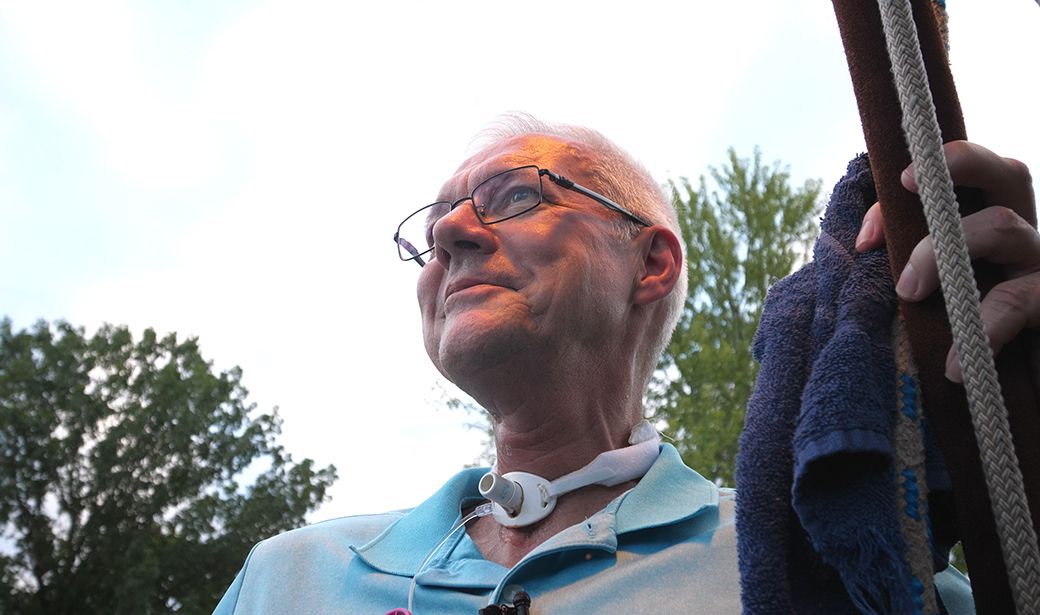 Gary Whitby and Tery Donelson met in an Ellis Fischel Cancer Center head and neck cancer support group back in 2012. They’ve remained close as Donelson has endured four surgeries and two rounds of chemotherapy and radiation. His most recent surgery occurred earlier this year. He’s hopeful the cancer will not return again.

Whitby has always admired his friend’s positive outlook, despite his health setbacks.

“Tery has such a great attitude. He’s always positive, and he’s an inspiration for others in our group,” Whitby said.

So, Whitby, who has remained cancer-free, wanted to do something uplifting to honor a friend who is so good at keeping others hopeful. As a hot air balloon operator, he rallied a crew and coordinated with MU Health Care to inflate his hot air balloon in the field near where support group meetings were held.

After the meeting ended, group facilitator Dana Kee from Ellis Fischel and the participants walked out into the backyard of the house to discover the colorful balloon and a curious crowd watching the crew prepare for launch.

Donelson’s girlfriend, Samantha White, greeted him with a hug as he approached the balloon and told him the balloon was for him. Moments later, Whitby and Donelson were airborne on a perfect September evening surveying the landscape of north Columbia.

As the balloon shrank in the twilight, White and her two children watched and waved. Everyone’s spirits lifted by a gesture grounded in friendship and buoyed by hope.